The availability of railroad services for transporting grains remains a focus for traders–with a large railroad union rejecting a tentative contract with freight railroads that was brokered by the White House last month. The American Farm Bureau Federation says there was a 19% rise in cars being filled with grains and shipped in 3Q versus last year. But there was a big jump in the amount of grain shipments overdue for arrival at their destination, with nearly 80,000 cars being late by over 11 days in the 3Q–an uptick of 1,800% from last year. 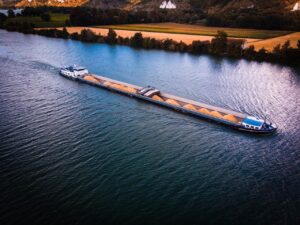 US Inspected 457k Tons of Corn for Export, 969k of Soybean

In week ending Oct. 6, according to the USDA’s weekly inspections report.

Following is a summary of USDA inspections for week ending Oct. 6 of corn, soybeans and wheat for export, from the Grain Inspection, Packers and Stockyards Administration, known as GIPSA.

China has raised its forecast for corn production in the 2022-23 year, citing surveys that found an increase in planted area, according to the latest China Agricultural Supply and Demand Estimates.

79% of crops harvested, vs the five-year average of 89%, the province’s agriculture ministry says Tuesday in a report.

Argentine farmers can expect 2022-23 soybean plants to yield similarly to the 2021-22 crop if the forecast for a drought to ease over the next two quarters comes to fruition, according to a Buenos Aires Grain Exchange report.

Following are selected highlights from a report issued by the U.S. Department of Agriculture’s (USDA) Foreign Agricultural Service (FAS) post in Buenos Aires:

“According to the Argentine government, farmers sold a record volume of soybeans, more than 13.7 million metric tons (MMT) in September, after the government offered a special exchange rate for producers. As a result, exporters booked nearly 4 MMT in export declarations, with China as the principal destination. Post raises projected MY (marketing year) 2021/22 soybean exports to 5.5 MMT and reduces projected crush to 37.5 MMT. Soybean ending stocks are lowered to 5.7 MMT, the lowest level since MY 2012/13. MY 2022/23 production is lowered to 49 MMT, due to lower-than-anticipated area switching from corn to soybeans. However, farmers may still make changes if dry weather persists.”

Dryness and frosts have hit Argentina’s wheat crop hard, Cristian Russo, head of estimates at the Rosario Board of Trade, says in an audio message sent to Bloomberg News.

Russia Says It Will Continue Work Toward Agreement on Grain Deal

“We managed to agree on a grain deal in July — prices fell — so we believe that we need to continue working toward an agreement. This gets results,” Finance Minister Anton Siluanov says in a statement issued after G20 gathering.

BRAZIL CORN EXPORTS SEEN REACHING UP TO 6.164 MILLION TNS IN OCTOBER VERSUS UP TO 5.5 MILLION TNS FORECAST IN PREVIOUS WEOCEK – ANEC

U.S. crop exports at Louisiana Gulf Coast terminals were at their lowest level in nine years for the first week of October, a period when export shipments typically accelerate, according to U.S. Department of Agriculture (USDA) data issued on Tuesday.

The ill-timed shipping disruption comes as farmers are busy harvesting corn and soybeans, their top cash crops, leaving exporters scrambling for supplies at the start of the busiest period of the year for overseas U.S. crop shipments.

In a weekly report, the USDA said 976,255 tonnes of corn, soybeans and wheat were inspected for export at the Mississippi River Gulf Coast in the week ended Oct. 6, the lowest for the first week of October in at least nine years and down 22% from the previous five-year average.

Two closed sections of the Mississippi River reopened over the weekend, allowing a backlog of stalled barges to begin moving again, but low water remains a concern for shippers amid a largely dry weather forecast.

Shippers are loading less grain per barge to prevent the vessels from getting stuck in the drought-parched river and towboats are hauling fewer barges per tow to navigate the narrowed channel.

Traders expect a slow start for exports in the fourth quarter, when a third or more of the year’s exports are typically loaded and shipped.

French soft-wheat exports outside the EU are now seen at 10.1m tons in the 2022-23 season, crops office FranceAgriMer said in a report Wednesday.

Europe Bulks Up on Foreign Corn After Drought Withers Harvest

The European Union is gobbling up foreign corn at double last year’s rate after summer drought withered the local harvest.

The bloc’s production of the staple grain — often fed to chickens, pigs and cows — sank 24% after blistering heat and dryness struck growers from France to Romania. The EU buys significant amounts of corn even in normal years, but the extreme weather has left it more reliant on imports to fill the gap and will put it ahead of China as the world’s top buyer.

EU corn imports since July 1 are running at 7.88 million tons, twice that of the prior season, government data showed Tuesday. Most of the cargoes are coming from Brazil, and the EU is also bringing in large amounts from Ukraine, where farmers are trying to clear supplies backlogged by the war.

The shortfall has boosted feed costs for livestock farmers, who are also grappling with surging expenses to heat barns and run tractors amid an energy crunch. Herds are dwindling, and the government expects beef, pork and poultry production to dip this year.

European Union soybean imports in the 2022/23 season that started on July 1 had reached 3.12 million tonnes by Oct. 9, data published by the European Commission showed on Tuesday.

The total so far this season compared with 3.38 million tonnes by the same week in the previous 2021/22 season, the data showed.

EU sunflower oil imports, most of which usually come from Ukraine, were at 448,677 tonnes, against 390,193 tonnes a year earlier, the data showed.

Soft wheat exports from the European Union in the 2022/23 season that started on July 1 had reached 9.81 million tonnes by Oct. 9, data published by the European Commission showed on Tuesday.

Planet Labs Boosts Estimate for US Corn Crop Ahead of WASDE

Amir Abdulla, the UN’s coordinator for the Black Sea Grain Initiative, is proposing quicker, targeted inspections of outbound crop ships from Ukraine, Reuters reported Tuesday, citing an interview with him in Istanbul.

US nitrogen-fertilizer prices remain robust, fueled by ammonia-plant outages in Europe due to high natural gas costs. India is 4Q’s largest buyer of urea — a form of nitrogen — but high inventories and a strong dollar could push the world’s largest importer to the sidelines after October’s tender.

The government of Panama and energy companies, including SGP BioEnergy, announced Tuesday that they will add green hydrogen production to an advanced biorefinery in development.

The facility plans to refine 180,000 barrels a day of biofuels, including sustainable aviation fuel (SAF), and generate 405,000 metric tons of green hydrogen annually. Producing green hydrogen will allow the facility to operate with net-zero emissions, SGP BioEnergy said in a news release.

The airline industry is harder to decarbonize than other types of transportation, so a massive ramp-up in SAF output will be needed for aviation to reach net-zero emissions.

SGP BioEnergy first announced the plan for the facility, located in Colon and Balboa, Panama, in May.

Construction is set to begin in 2023. For the project, SGP BioEnergy will work with Topsoe Sustainable Aviation Fuel to produce green hydrogen from waste carbon and renewable fuels by-products produced during refining, the release said.