Global Ag News for May 7

Malaysian palm oil prices were up 137 at 4,352 (basis July) at midsession, the biggest gains in 2 decades on supply worries.

U.S. Weather Forecast: A beneficial precipitation event involving both rain and snow is still expected in Montana, South Dakota, and southwestern North Dakota late Friday through Sunday. Meaningful precipitation may also get into part of central North Dakota. Last evening’s GFS model run showed little to no change with this.  One of the largest precipitation changes in last evening’s GFS model run was the decrease in the Corn Belt, Northern Plains, eastern Delta, and southeastern states May 16 – 18.

South America Weather Forecast: Concern remains of dryness in Safrinha corn areas of Brazil. There may be “some” shower activity from Mato Grosso do Sul into Parana and Sao Paulo next Thursday into May 15; however, this is unlikely to counter evaporation. Conditions in Argentina are expected to continue being very good for late season crops.

Chicago-traded November soybeans on Thursday topped $14 per bushel for the first time in eight years, having surged 27% since the start of 2021. That is the best performance for the contract during that period in nearly 50 years, but it has still staged historic losses relative to corn. The year did not start that way. November soybeans were highly elevated versus December corn through March, very much favoring the oilseed, similar to both 2017 and 2018. But the new-crop soybean-corn ratio over the last month has plunged 11% to 2.24 as of Thursday, levels that have not been seen since 2019, and that is despite hefty gains in soybeans. Such a sharp fall in that ratio from early April to early May has not been observed for at least a quarter century. 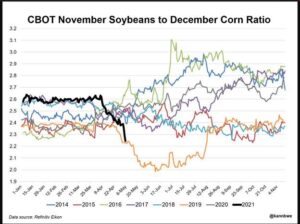 For the week ended April 29th–

U.S All Wheat sales are down 3% versus a year ago, shipments unchanged with the USDA forecasting a 2% increase

Seeding is underway in Saskatchewan, with nine per cent of the 2021 crop now in the ground. This is ahead of the five-year average (2016-2020) of six per cent for this time of year. An abnormally cool spring delayed field operations in many parts of the province, but producers have indicated that warmer daily temperatures have allowed for a big push to get seed into the ground.

China’s soybean imports in April rose 11% from the same month a year earlier, boosted by the arrival of some delayed Brazilian cargoes, customs data showed on Friday. China, the world’s top importer of soybeans, brought in 7.45 million tonnes of the oilseed in April, up from 6.714 million tonnes a year earlier, according to General Administration of Customs data.

China will further promote stable grain production and step up its ability to ensure food security, a State Council executive meeting chaired by Premier Li Keqiang decided. Thanks to a succession of bumper harvests in recent years, the country has enjoyed ample supply of major agricultural products and ensured basic self-sufficiency in cereal grains and absolute grain security. There is solid foundation for another good harvest this year. The winter wheat acreage increased for the first time in nearly four years, and the crop is in a better shape than the previous years.

China’s exports surged 32.3% over a year ago in April as global consumer demand strengthened, while imports rose 43.1%. Exports rose to $263.9 billion, in line with the previous month’s growth but down from the explosive 60.6% rise in the first two months of 2021, customs data showed Friday. Imports increased to 43.1%, accelerating from March’s 38.1% expansion. Exports to the United States rose 30.8% over a year ago to $42 billion despite a lingering tariff war with Washington, the General Administration of Customs of China reported. Imports of American goods rose 23.5% to $13.9 billion. China’s global trade surplus narrowed by 5% to $42.8 billion, an indication demand is recovering faster in China than in the rest of the world. Its political volatile surplus with the United States widened by 33.4% to $28.1 billion.

China imported 922,000 tonnes of meat in April, up 6.9% from the same month a year earlier, customs data showed on Friday, as the world’s top pork producer continues to face domestic shortages.

Brazil’s unit of U.S.-based grain trader Bunge announced on Thursday a partnership with logistics and technology provider Target for creation of a company focusing on the hiring of road freight digitally. The company will be called Vector, and the move comes one year after the launch of an application of the same name that was developed for Bunge to hire freight more efficiently.

Argentine soy and corn harvesting is being driven by ideal weather conditions but the lack of rain that is helping farmers bring in crops is also contributing to the shallowness of the Parana River, which has begun to dent agricultural exports. Lack of navigability on the river, which carries about 80% of Argentine grain exports, is “an underestimated problem” for exporters.

The condition of French soft wheat declined for a fourth consecutive week but remained well above the level a year earlier, data from farm office FranceAgriMer showed on Friday, as crops emerged from a chilly, dry April. An estimated 79% of French soft wheat was in good or excellent condition in the week to May 3, down from 81% a week earlier, FranceAgriMer said in a cereal crop report. The drop was less than the four-point decline in the previous week, suggesting last week’s return of rain in parts of France may have helped some crops.

The Moroccan government said on Thursday it will reintroduce customs duty on soft wheat and durum starting from June 1, in order to cut imports amid expectations of a larger harvest this year. Morocco expects a cereals harvest of 9.8 million tonnes this year, up 206% from last season.

Saudi Arabia has banned imports from 11 Brazilian poultry plants with no warning or explanation, according to a joint statement from Brazil’s agriculture and foreign ministries on Thursday. JBS SA, the world’s largest meat company, confirmed that it was affected by the ban but declined to disclose how many plants had been targeted by the decision.