Global Ag News for May 3

U.S. Weather Forecast: Excessive rain fell across portions of Texas during the weekend resulting in some flooding. Portions of Iowa, southeastern South Dakota, northeastern Nebraska and southern Minnesota reported excessive heat during the weekend in the very same area that has been unusually dry in the past 30 days. Crops and livestock were stressed by the heat and rapid soil moisture depletion resulted.

U.S. northern Plains and a part of the Canada Prairies will receive “some” much needed rain during the coming weekend and early next week. U.S. Midwest, Delta and southeastern states will experience alternating periods of rain and sunshine during the next ten days. U.S. Delta and southeastern states will experience a good balance between rain and sunshine over the next ten days.

South America Weather Forecast: Brazil is facing another ten days to two weeks of dry weather in its Safrinha corn. Argentina weather was also mostly dry during the weekend with temperatures near to above average. Argentina rainfall through Wednesday will be sufficient to maintain moisture abundance for late season crop development.

The USDA is scheduled to release its monthly fats and oils report at 2 p.m. CDT.

Speculators were expected last week to have gone on a record buying spree in Chicago corn, but it was a commercial short squeeze that seemed to better explain the highly volatile price activity. 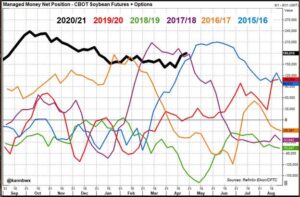 Wire story reports a White House goal to slash U.S. greenhouse-gas emissions hinges in part on farmers and agriculture companies changing the way they manage fields and feedlots. The farm sector says it will need the government’s help to make it happen. The Biden administration effort outlined in April has drawn support from agribusiness giants including Tyson Foods Inc., JBS SA, Cargill Inc. and CF Industries Holdings Inc., which have been pursuing their own environmental commitments. Individual farmers, whose participation is critical to meeting the administration’s goals, are weighing the potential costs and benefits to their bottom lines, and say government support will be needed.

Selected highlights from a report issued by the U.S. Department of Agriculture’s Foreign Agricultural Service post in Beijing:

—Swine numbers are not likely to rebound until at least mid-2021 if the current African Swine Fever (ASF) outbreak is brought under control. In late 2020 a resurgence of ASF reduced China’s population of breeding sows and piglets. These losses continued through the first quarter of 2021 as ASF outbreaks were reported in multiple provinces.”

Brazil’s 2020/2021 total corn crop estimate was lowered by almost 8% to 104.1 million tonnes as dry weather is affecting yields of the country’s second corn plantings, said forecaster Safras & Mercado on Friday. The overall output forecast was affected by a cut of some 10 million tonnes of Brazil’s second corn forecast, now expected to be 70.7 million tonnes, according to Safras.

Argentina’s grains exports brought in some $3 billion in April, the CIARA-CEC chamber of exporters and oilseed producers said on Saturday, driven by high global prices for soybeans, corn, wheat and other cereals. The monthly result, which comes despite some farmers holding back on selling crops as a hedge against a weak local peso currency, marked a 9.29% increase against the month before, which was already at least an 18-year record high.

Ukrainian wheat export prices have risen $14 a tonne over the past week amid fears of a weaker harvest in the United States, the European Union and Brazil, the APK-Inform agriculture consultancy said. Bid prices for high-quality soft milling wheat increased to $264-$270 a tonne FOB Black Sea port, APK-Inform said. Feed wheat rose by $12 a tonne to $258-$264 FOB Black Sea.

Export prices for Ukrainian 2021 rapeseed rose by around $100 a tonne over the past 20 days amid an expected decrease in rapeseed output in the European Union and global upward trend, analyst APK-Inform said. Bid export prices jumped to $620-$640 a tonne CPT (carriage paid to) Black Sea ports with the delivery in July-August as of April 29 from $525 to $533 as of April 9.

Export prices for Ukrainian sunflower oil have fallen by up to $30 a tonne over the past week on weak demand, analyst APK-Inform said. APK-Inform said sunoil export bid prices had decreased to $1,525-$1,535 a tonne FOB Black Sea with delivery in May-June.

Consultancy Strategie Grains kept its forecast for the 2021 rapeseed harvest in the 27-nation European Union almost unchanged at 16.78 million tonnes, against the 16.80 million tonnes projected a month ago. The outlook for this year’s crop was 2.1% above an estimated 16.43 million tonnes produced in 2020, it said in a monthly oilseed report.

Euronext new-crop wheat futures edged up on Friday, steadying after a day-earlier slide, to post a 10% gain for April that was part of a broad weather-fuelled rally in grains. September milling wheat settled up 0.50 euros, or 0.2%, at 219.25 euros ($263.54) tonne.

Severe frosts this month have damaged already struggling rapeseed crops in France, limiting the potential for a rebound in European production despite better prospects in countries including Germany and Poland. The European Commission on Thursday trimmed its forecast for the 2021 rapeseed crop in the European Union’s 27 countries to 16.5 million tonnes, close to last year’s poor harvest.

Selected highlights from a report issued by the U.S. Department of Agriculture’s Foreign Agricultural Service post in Canberra:

—Another big production year for Australian grains is forecast in marketing year (MY) 2021/22 after a strong drought-recovery year in MY 2020/21. Wheat production is forecast at 27 million metric tons (MMT) in MY 2021/22 and barley at 10 MMT, both down from the huge crops in the previous year.

Egyptian authorities have so far procured 1 million tonnes of wheat in the local harvest, the agriculture ministry said. The country is also the world’s largest wheat importer.