Global Ag News for May 28th

Malaysian palm oil prices overnight were up 86 ringgit (+2.20%) at 4002 on stronger soybean oil prices in Chicago and concerns about supplies due to coronavirus-related restrictions in some areas of second-biggest grower Malaysia.

China’s efforts to rein in surging commodities prices are likely to be in vain as it’s lost the ability to boss the market amid the developed-nation recovery from the pandemic, according to Goldman Sachs Group Inc.

The largest buyer of many commodities, China has been trying to temper the rally due to fears over inflation. It’s jawboning has had some success, with local iron ore prices down more than 20% since May 12. The Bloomberg Commodity Spot Index is only down around 1% over the period, however.

Farmers in Argentina, the world’s seventh-biggest supplier of wheat, are piling into forward contracts to sell their grain to traders like never before. While the crop is only just getting planted — with the harvest season mainly in November and December — growers have already sold and priced 2.3 million metric tons, around double their commitments at the same point last year. High prices, good field moisture for seeding and concerns that the government will meddle in exports with higher taxes or restrictions are all driving the spree.

The quality of U.S. corn assembled for export early in the 2020/2021 marketing year was rated at U.S. grade No. 2 or better on all grade factors, with higher test weight and lower total damage and broken corn and foreign material (BCFM) than 2019/2020 export samples, according to the U.S. Grains Council’s (USGC’s) 2020/2021 Corn Export Cargo Quality Report

Shipments along the Mississippi, Illinois, Ohio and Arkansas rivers increased in the week ending May 22 from the previous week, according to the USDA’s weekly grain transportation report.

Domestic Trade Secretariat and national competition regulator object the merger and call on the companies to take measures to mitigate concentration in Argentina’s sunflower seed market, according to a Production Ministry statement dated May 22. Syngenta-Nidera would have 60% of the market: statement

China’s massive livestock sector is set to snap up millions of tonnes of wheat from the country’s winter harvest that began this month, extending a run of crop-switching in animal feed and further cooling demand for corn imports. Corn imports surged last year after a decline in stockpiles and production, pushing up prices and reshaping global grain markets as feed producers and pig farmers scoured the world for supplies. At the same time, China’s feed sector purchased record volumes of cheaper wheat from the 2020/21 season for use as a substitute for corn, traditionally the main grain in animal rations.

Russia to reduce export tax on soybeans from July 1 -TASS

The Russian government has reduced the country’s export tax on soybeans to 20% from 30% starting from July 1, TASS news agency reported, citing the government. The new tax will be in place until September 2022, it said.

This year’s EU soft-wheat harvest is now seen at 126.2m tons, up from an April estimate for 124.8m tons, the European Commission says in a report.

The International Grains Council cut its inventory estimate for the 2021-22 season to 595 million tons, the lowest in seven years, according to a report published Thursday. Rising animal-feed demand and a drought-stricken Brazilian corn crop are outweighing bumper harvests elsewhere, shrinking the world’s grain supply cushion for a fifth straight season. 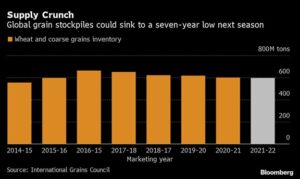 Next season’s supply drawdown comes even as the IGC expects China’s grain imports to ebb from an all-time high, easing 14% from this year’s levels to 47.7 million tons. That figure includes 18.5 million tons of corn and 9 million of wheat, which are still well above its historical purchases. The country has been loading up on foreign crops to feed its hog herd, which is recovering from disease outbreaks.

“While China’s imports of grains are seen remaining elevated, they may not match the record of the season before,” the council said in the report.

The pullback in commodities after China’s warnings over onshore speculation is a “clear buying opportunity,” Goldman analysts including Jeff Currie and Damien Courvalin said in a report.

French Wheat, Barley Ratings Improve in Week to May 24: AgriMer

The amount of France’s soft-wheat crop rated in good or very good condition improved in the week to May 24, FranceAgriMer data showed on Friday. Corn planting is 98% complete

Saskatchewan Plants 86% of Crop Even as Much-Needed Rain Arrives

Seeding in Saskatchewan is ahead of its five-year average of 77% for this time of year, the provincial government said in a weekly crop report Thursday.

One of Canada’s key agricultural provinces was hit by a late-spring frost overnight Wednesday, but the damage will not be known for days, a spokesman said Thursday.