Global Ag News for May 13th

Malaysian palm oil market is on holiday until Monday.

U.S. Weather Forecast: Last evening’s GFS model run shifted some areas of rainfall around compared to the midday GFS model run; however, it was similar in showing significant and frequent rain throughout a majority of the next two weeks in the central part of the U.S. from central Texas into the Corn Belt. Frequent rain is expected and will include the western Delta and central and eastern parts of the Hard Red Winter Wheat Region as well and extending into West Texas at times.

Strong domestic demand will keep U.S. stockpiles of corn and soybeans near seven-year lows even after farmers harvest the crops they are currently seeding, the government said. The stocks estimates were in line with market expectations but the report showed that the recent gains in ag commodities, highlighted by soybean futures to a nearly nine-year high this week, are likely to continue.

Wire story reported Chicago corn futures are trading at multi-year highs after major harvests came up short and China burst on to the import scene, but the U.S. government thinks the situation will be more manageable throughout the next year than market participants might have expected. The key to this supply boost is a substantial recovery in production, though confidence in that is a long way off and inventory is expected to remain historically tight. The outcome of the U.S. crop will be among the first checkpoints, and a strong result could kick off a move toward lower prices. 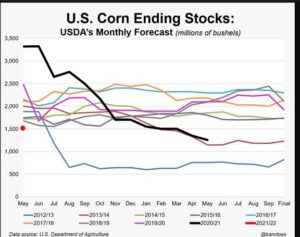 More than 400 barges were delayed on the lower Mississippi River on Wednesday after a bridge crack prompted the U.S. Coast Guard to halt vessel traffic on a portion of the waterway crucial for shipping crops to export markets. The disruption hit as strong demand for U.S. corn and soybeans has tightened inventories and pushed crop prices to their highest in more than eight years. Also, U.S. President Joe Biden is seeking to have Congress approve a $2.25 trillion infrastructure bill. The Coast Guard stopped all traffic on the Mississippi River near Memphis – between mile markers 736 and 737 – after a crack was discovered in the Hernando de Soto Bridge that spans the river

Broiler-Type Eggs Set in the United States Up 7 Percent

Broiler-Type Chicks Placed in the United States Up 14 Percent

Influential Chinese agricultural data provider Cofeed has suspended operations without explanation, leaving a gap in highly valued information on grain and oilseed supplies in the world’s biggest soybean buyer. The company, officially known as Beijing TianxiaLiangchang Technology Co Ltd, stopped updating its website with data and analysis on April 29. It has also stopped supplying daily and weekly data to Refinitiv, the financial data company, which published an advisory for clients using its Eikon platform. “We are still investigating the reasons for why the source has not sent this data.

China Weighs New Economic Envoy to U.S. Beijing is considering whether to replace Vice Premier Liu He as its top economic envoy with Washington, a decision that Biden administration officials say will indicate the depth of China’s interest in economic cooperation. Under this scenario, these officials said, Mr. Liu, who has spent decades working on economic reform, would be succeeded by Hu Chunhua, a younger vice premier who made his mark overseeing the restive Tibet region and running the trade-reliant coastal province of Guangdong but who has little experience in U.S.-China relations. The deliberation is part of a wider personnel shuffle as China recalibrates its approach to the new U.S. administration.

Dry weather and poorly timed planting are weighing on Brazil’s second corn crop this year, reviving fears of another surge in feed prices like the one that battered big meatpackers after a 2016 drought. Soaring prices convinced Brazilian farmers to plant their second corn crop outside the ideal climate window this year. But the crop was hit by the country’s worst drought in five years, reducing yields. Given surging demand in global grains markets, a corn shortage could squeeze profit margins in Brazil for some of the world’s biggest protein producers, including JBS SA and BRF SA. JBS and BRF, which report earnings later on Wednesday, declined to comment on margin pressure from rising feed costs. JBS’s net income plunged 92% in 2016, in part due to surging Brazilian feed costs, and BRF’s annual results swung to a loss.

Argentine farmers have sold 17.3 million tonnes of soybeans from the 2020/21 season, after transactions were registered for 886,100 tonnes in the week ending on May 15, the Agriculture Ministry said. Ministry data showed the pace of soy sales lagged that of the previous season. Growers said that they had been hoarding crops as a hedge against the weakening local peso. Last year they had sold 21.4 million tonnes by this date. Argentine growers are currently harvesting 2020/21 soy.

Russian exports of wheat increased to 8.7 million tonnes in the first three months of 2021 from 7.3 million tonnes a year ago, official customs data showed.

Farm office FranceAgriMer cut its forecasts of French wheat, barley and maize stocks at the end of this season to the lowest levels in years, underscoring tight grain supply as attention turns to harvest prospects. For soft wheat, France’s main cereal crop, stocks at the close of the 2020/21 season on June 30 are now expected at 2.6 million tonnes, down from 2.7 million projected last month. The new stocks forecast was down more than 13% from 3.0 million tonnes at the end of 2019/20, and would be the smallest volume since 2013/14, it said.