Chinese Ag futures (September) settled down 4 yuan in soybeans, up 2 in Corn, down 18 in Soymeal, down 2 in Soyoil, and up 74 in Palm Oil.

South America Weather Forecast: Notable moisture relief to interior southern Safrinha corn areas of Brazil is still unlikely in at least the next two weeks and last evening’s GFS model run kept much of this area mostly dry. Conditions in Argentina will still be favorably mixed the next two weeks.

Wire story report had price action for corn and soybeans on the Chicago Board of Trade has been nothing short of impressive this month, and more could be in store for the new-crop contracts as April is historically an uncommon time for their high-water marks. Since 1973, new-crop November soybeans have made their annual highs in April only twice: 1986 and 1981. Along with October, April is the least common month for the high. December is not considered here since the analysis examines the only the year of expiration. June is the most popular month for highs in new-crop soybeans with 10 instances in the last 48 years. July and November are tied for second with seven apiece. May and August are next at four each. 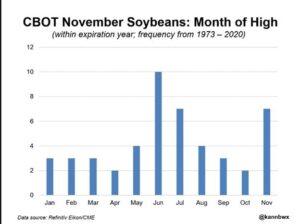 —With cold weather putting a halt to the rapid sowing pace seen earlier in the month, unchanged area and yield forecasts maintain 2021/22 U.S. corn production at 15.32 [13.9–16.9] billion bushels. Corn area is still expected at 93.9 million acres, above the USDA March Prospective Plantings report figure of 91.4 million acres. The next USDA survey-based estimate of acreage will be released in the 30 June Acreage report.

When Microsoft Corp made a massive purchase of carbon credits in January, it turned to a relatively new source: farmers who plant crops meant to trap carbon in the soil. The credits are financial instruments generated by projects that reduce or avoid the release of greenhouse gases, such as solar farms or tree-plantings. The projects’ owners can sell the credits to companies who then use them to make claims of offsetting the climate impact of their operations. Microsoft bought nearly 200,000 of the farm-based credits at an undisclosed price – among the largest-ever purchases of agricultural credits – as part of a larger deal to buy 1.3 million credits. But the tech giant rejected far more of the more than 5 million credits offered by agriculture projects because of systemic problems with measuring their climate benefit. The Microsoft purchase underscores both the promise and the problems of the emerging industry in agriculture-based climate credits.

Argentina’s stalled soy harvest is set for a boost from a period of expected dry weather, meteorologists and grains analysts said, after recent heavy rains in key farming areas had slowed down farmers gathering in their crops. The expected weeks of dry weather should help allay fears of further losses to the important soy harvest in the world’s largest exporter of processed soy meal and oil, which relies heavily on the grain for much-needed foreign currency.

Argentine farmers have sold 15.53 million tonnes of 2020/21 soybeans, after registering 1.16 million tonnes in the most recent reported week period, the Ministry of Agriculture said. The ministry said that the rhythm of sales was behind the previous cycle a year earlier, when at the same date it had registered sales of 20.26 million tonnes of soybeans. Argentine farmers are clinging to their crops, despite a high international price, as a hedge against a weak local peso currency, weighing on the flow of export dollars the country needs to replenish its battered foreign currency reserves.

The dredging of the Parana River, Argentina’s grains superhighway, will continue for another 90 days, according to a government resolution issued on Wednesday aimed at ensuring that the country’s export hub of Rosario will stay open for business. The current dredging contract was set to expire at the end of the month. The looming deadline had caused nervousness in the local grains industry, the country’s main source of export dollars, at a time when central bank reserves are being strained by a three-year recession exacerbated by the COVID-19 pandemic. “It’s official. This guarantees the maintenance of the river. The current system will continue for another 90 days.

Ukraine’s 2020/21 season corn ending stocks could reach a record 2.7 million tonnes, or 70% more than a season earlier, the APK-Inform agriculture consultancy said. Ukraine harvested 30.3 million tonnes of corn in 2020 and the consultancy forecast that the exports might total 23.2 million tonnes.

Such a significant volume of carry-over corn stocks should have an overwhelming effect on price dynamics. However, limited farmers’ corn supplies to the market is still supporting an upward price trend. The consultancy said this week corn bid export prices rose by $7 over the past week to $262-$267 FOB.

Euronext wheat ended slightly lower on Wednesday, recovering from an earlier slide in step with Chicago as grain markets sought fresh direction after a steep rally this month. September milling wheat settled down 0.75 euros, or 0.3%, at 226.75 euros ($274.14) a tonne. In earlier lost as much as 7.25 euros as it retreated from Tuesday’s life-of-contract high of 233.50 euros.

Egypt’s strategic reserves of vegetable oils are sufficient until September following the latest purchase by its General Authority for Supply Commodities on Wednesday, the supply ministry said.

Indonesia’s crude palm oil production and exports surged in March on-year, while end-stocks remained low, signalling prospects of higher prices in the near future, an official at the country’s palm oil association GAPKI said on Wednesday. Crude palm oil output stood at 3.71 million tonnes in March, 13.5% higher than the 3.27 million tonnes produced in the year-ago period, and up 20.9% compared with the previous month. Palm exports, including refined products from the top producer, stood at 3.24 million tonnes in March, up 18.68% from a year ago and 62.8% higher from February.