Malaysian palm oil prices were up 90 ringgit at 3,895 (basis July) at midsession on tightened supplies.

U.S. Weather Forecast: Frosts and freezes in the mornings Wednesday and Thursday are still expected to cause crops to get burned back from the Hard Red Winter Wheat Region and West Texas through the Corn Belt, Virginia, northern North Carolina, and far northern part of the Delta.

The GFS model run last evening shifted and altered weather disturbances in the Northern Plains in the week 2 of the outlook with a notable increase and some notable decreases for the region. A more active weather pattern will be possible for the Northern Plains with some beneficial precipitation in the April 30 – May 5 timeframe. The GFS model has been too aggressive with its increases and decreases in the region and more changes are expected as it tries to figure out the various weather disturbances that could move through.

South America Weather Forecast: The lack of much change in last evening’s GFS model run still keeps confidence high in the forecast. Some shower and thunderstorm activity will be locally meaningful from Rio Grande do Sul into Parana, Brazil Friday through Sunday; though, this rain is unlikely to reach Sao Paulo, central and western Minas Gerais, eastern Mato Grosso do Sul, and southern Goias.

Conditions in Argentina will still be mostly good; though, rain tonight through Saturday will lead to some fieldwork delays and may slow crop maturation.

Global commodity prices are expected to stay firm around current levels in 2021 after recovering in the first quarter buoyed by strong economic growth, the World Bank said on Tuesday.

POLL-U.S. March cattle placements seen up 33.7% from year ago-analysts – Reuters News: The report is expected to show a steep increase in the number of cattle placed in feedlots in March, the first comparison to the beginning of the pandemic last year. Placements tumbled in March 2020 as COVID-19 outbreaks closed slaughterhouses and slowed meat processing.

China’s agriculture ministry published guidelines on Wednesday for the reduction of corn and soymeal in pig and poultry feed, in a move that could reshape the trade flows of grains into the country. The move follows a surge in imports of corn by China last year as it faced a growing deficit of the grain, used largely in animal feed. The aim of the guidelines is to improve the usage of available raw materials and create a new formula that better suits China’s conditions, the Ministry of Agriculture and Rural Affairs said. It said wheat, rice, cassava, rice bran, barley and sorghum were all suitable alternatives for corn, while rapeseed meal, cottonseed meal, peanut meal, sunflower meal, distillers dried grains, palm meal, flaxmeal, sesame meal and corn processing byproducts were good options to replace soymeal. It also provided some suggested feed formulations depending on the region of the country. Those included reducing corn by at least 15% in pig diets in Northeast China by using rice and rice bran, or using sorghum, cassava flour, rice bran meal and barley to replace corn in pig feed in southern China.

Brazil’s heavily exported second corn crop has been on the markets’ radar since last year, when the country’s soybean crop was planted later than usual, increasing the chances that corn would go in late since it is planted immediately after the soy harvest. Those delays worsened earlier this year when soybean harvest came around, as persistent rains kept machinery out of the fields. Second corn was planted at the slowest pace in at least a decade and now weather is threatening to reduce the crop’s potential, especially in the south. Crop conditions have already plunged in No. 2 producer Parana, which grows 15% of Brazil’s second corn crop. As of Monday, just 62% of the southern state’s corn was in good condition, down from 76% a week earlier and 92% the prior week. 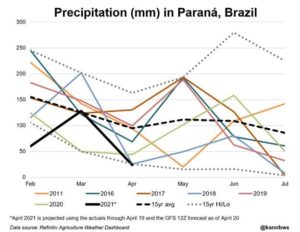 Brazil’s 2020/2021 total corn crop could reach a record of 107.3 million tonnes, according to the average of 11 analysts polled by Reuters on Tuesday, even as the country’s second corn crop was planted outside the ideal climate window. If the average of forecasts is confirmed, Brazil’s total production will have grown 4.6% from last season, according to government estimates, driven by an expansion of area bigger than 1 million hectares (2.4 million acres). Despite the projection showing growers may set a new record for corn production, the market is apprehensive about potential losses given the fact that Brazil’s second corn crop, which represents the bulk of output, may receive less rain than needed to develop after planting delays.

Brazil’s decision to temporarily suspend grain import tariffs is likely to benefit the United States and Ukraine, whose producers could sell products like corn for use as feed in Brazil, the leader of a Brazilian meat lobby told Reuters. The government announced that it would waive import duties from supplies outside the South American Mercosur trade bloc, in response to a direct request from meat association ABPA, its President Ricardo Santin said. The industry is seeking alternative corn providers given the high prices of the cereal in the domestic market.

Traders have used around 85% of the total wheat export quota of 17.5 million tonnes imposed for the whole 2020/21 July-June season. The ministry has said wheat exports were unlikely to reach the full quota this season.

Euronext wheat rose sharply on Tuesday, with new-crop positions setting fresh contract highs, on the back of a rally in Chicago fuelled by cold weather threatening U.S. wheat crops. September milling wheat settled up 3.25 euros, or 1.6%, at 210.25 euros ($252.93) a tonne. It earlier reached 212.25 euros, a new life-of-contract peak.