In retrospect, the treasury markets ended last week with a very narrow trading range, perhaps because US scheduled data was offsetting. Furthermore, the equity market showed corrective action and that lightly supportive outside market influences seem to prompt end of month bond buying by fund managers. In looking ahead, it should be noted that next Friday will bring nonfarm payrolls with the early trade expecting an addition above 900,000 and that should facilitate renewed optimism on the recovery and in turn could send bonds back to the March lows. While the treasury markets are tracking lower early this week, the markets have seen relatively narrow trading ranges recently and have been content to chop in both directions within a sideways pattern for over 2 months!

After making a downside breakout extension last Thursday, the dollar index came roaring back on Friday in a rally that was probably more than simple month end short covering. Perhaps US scheduled data fostered a measure of economic uncertainty at the same time that a bounce in US daily infections from low levels early in the week provided safe haven buying of the dollar. To a lesser degree, weakness in the US equity markets might also have contributed to the dollar recovery. While the dollar index forged a 6-day upside breakout at the start of this week the market quickly recoiled from that level as if it lacked bullish interest above 90.58.

While the S&P failed to make a new all-time high in the initial trade last Friday, the market was overbought and possibly suffered end of week and end of month long profit-taking. The markets were unresponsive to favorable US spending and income readings but were undermined later on by Chicago PMI and University of Michigan sentiment as it failed to reach expectations. Nonetheless, Michigan sentiment figures remain at very high levels and the corporate earnings wave remains very supportive of prices. Global equity markets at the start of this week were mixed with Asian stocks generally lower and the rest of the world carving out very minor gains.

At least to start this week, the gold and silver markets are climbing against outside market forces that have recently pressured prices. In fact, gold and silver are higher despite a higher high for the move in the dollar (the dollar failed to hold that rally) and higher US interest rates. However, the markets are apparently soothed by comments from US Treasury Secretary Yellen indicating that the stimulus plans will help the economy but not generate inflation. Unfortunately for the bull camp, India continues to post record daily infections with weekend infections surpassing 400,000 per day, which in turn is prompting predictions that Indian gold demand will continue to fall sharply as the pandemic worsens.

In addition to ongoing fears of falling energy demand in India, the market is also seeing increased production by Iran and Russia and therefore the bear camp has the initial edge. In fact, a critical support point at $63.08 was violated and leaving the market on a back foot early this week. Additionally, a significant reversal at the end of last week in June crude oil puts the charts in a negative track. Perhaps the market is undermined as a result of news that Russia increased its output by 2% last month shortly on the heels of the OPEC plus deal to allow all members to return production in a measured fashion.

In the short run, the soybean market seems just too overbought to put in another leg higher just yet. Fundamentally, the vegetable oil markets appear to be near a peak as global production is expected to increase rapidly into the new crop season, and old crop demand could be hurt by historically high prices. US soybean oil is trading at a massive premium to South America soybean oil which is likely to result in aggressive imports of South America soybean oil to the US. In addition, US crushers on the East Coast are also in a position to import South America soybeans. Palm oil production is already on the rise and other oilseed acreage is expected to increase sharply due to the current price rally.

There is still very little rain in the forecast for key Brazilian growing areas, and this leaves corn with a positive short-term fundamental tilt which is not the case for the other grains. The lack of deliveries on first notice day drove corn sharply higher on the session Friday and May corn posted contract highs and closed up 84 1/2 cents for the week. There are still no deliveries for second notice day. July corn closed up the 25 cent limit with a gain of 40 3/4 cents for the week. Traders are already lowering their Brazil production forecasts.

July wheat closed slightly higher on the session Friday after choppy and two-sided trade. This left the market with a gain of 22 1/2 cents for the week. French wheat crop conditions were lower and this supported strong gains for the Paris wheat market and traders remain concerned with the lack of rain for the Northern Plains in the Canadian Prairies. The southern and Western Plains also look to turn hot and dry on the extended forecast models. A surge higher in corn was the key positive factor as outside market forces were quite negative with a rally in the US dollar to a six session high. For second notice day, deliveries reached 200 contracts as compared with zero on Friday. Kansas City wheat deliveries were 5 contracts which pushed month to date deliveries to 595 contracts.

The hog market remains in a solid uptrend as traders see solid demand from China and a continued strong export market for US pork. The USDA pork cutout released after the close Friday came in at $108.72, up $2.16 from $106.56 on Thursday but down from $110.06 the previous week. The CME Lean Hog Index as of April 28 was 106.89, down from 107.01 the previous session and but up from 105.99 the previous week. June and July hogs closed limit-up on the session Friday with July into new contract highs. More talk that the China pig heard growth rate has been slowed by too many African swine fever outbreaks has helped to support. The rally was especially impressive with corn prices sharply higher and the US dollar also up sharply on the day. 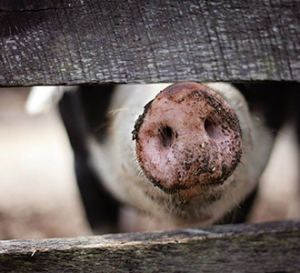 The cattle market seems to have already priced in the bearish short-term weakness in the cash market, but the surge in the boxed beef market opens the door for some strength in the cash market during May. Consumer demand remains extremely strong and eventually packers may be needing to bid up the cash market. Packer margins are extremely profitable and they will have the incentive to move as much beef as possible at the high level. The USDA boxed beef cutout was up $2.61 at mid-session Friday and closed $2.74 higher at $296.50. This was up from $283.77 the previous week and was the highest the cutout had been since June 2, 2020. Cash live cattle trade was relatively quiet on Friday. In Nebraska 723 head traded at 119, versus an average of 122.26 the previous week. As of Friday, the 5-day, 5-area weighted average price was 119.01, down from 121.21 the previous Friday. June cattle closed higher on the session Friday after choppy and 2-sided trade. August cattle closed moderately higher.

Cocoa’s vicious whipsaw action during Thursday and Friday left a 2-day price range that was 64 points larger than the combined range of the previous 13 sessions. Although the longer-term demand outlook remains positive, cocoa is likely to see additional downside follow-through until the market can find its footing. July cocoa stayed on the defensive after Thursday’s late pullback as it remained under significant pressure all day and reached a new 2 1/2 week low before finishing Friday’s trading session with a very heavy loss. For the week, July cocoa finished with a loss of 68 points (down 2.8%) for a second negative weekly result in a row, an outside week down and a negative weekly reversal from last Thursday’s 6-week high.

In spite of bullish developments, coffee was unable to avoid end-of-week and end-of-month profit-taking and long liquidation. With a bullish supply outlook and improving demand prospects, coffee may be able to find a near-term floor early this week. July coffee was able to build on early strength, but turned to the downside at midsession before finishing Friday’s trading session with a moderate loss. For the week, however, July coffee finished with a gain of 2.95 cents (up 2.1%) and a fourth positive weekly result in a row.

Cotton appears to be consolidating its recent move. On Friday it closed higher, managing to retrace roughly half of its losses from the previous session with an inside trading day. The market found support from indications that China would be importing more cotton this year. The National Development and Reform Commission issued an additional 700,000-tonne quota for cotton imports in 2021, which is the equivalent of 3.2 million bales. This quota applies to non-state purchasers. How much (if any) will the additional quote increase China’s purchases of US cotton?

The sugar market was able to find its footing following 3 sessions of whipsaw price action, but it will start the week and month well below last Tuesday’s multi-year high. While it avoided a negative weekly key reversal, sugar remains vulnerable to additional long liquidation and profit-taking early this week. July sugar  started out under pressure, but regained strength late in the day to finish Friday’s inside-day session with a modest gain. For the week, July sugar finished with a gain of 10 ticks (up 0.6%) which was a fourth positive weekly result in a row.