In week ending June 24, according to the USDA’s weekly inspections report.

Wheat crops faced a difficult start to the season due to a dry, warm autumn and cold spells during winter, the EU’s Monitoring Agricultural Resources unit said on Monday in a report.

Brazil has asked China to clarify certain aspects of a new national soybean standard that changes quality requirements for the grain, including how they will be implemented and assessed, a Brazilian Agriculture Ministry official said on Monday.

China’s proposed new standard for the oilseeds, currently under discussion at the World Trade Organization, is expected to replace one from 2009, said Glauco Bertoldo, who directs Dipov, the agriculture ministry’s inspection services department for vegetable products.

China notified the WTO in February and the new proposal comes as Brazil revises its own soy standard, the official said.

However, one potential issue relates to soy’s maximum moist levels, set at 13% under China’s new proposed standard, below Brazil’s 14% threshold.

China to Sell 4.7M Tons of Low-Grade Wheat for Feed Use: Portal

China will sell 4.7 million tons of low quality wheat from state stockpiles to some designated animal feed mills, according to cngrain.com, a state-backed industry portal.

An estimated 79% of the French soft wheat crop was in good or excellent condition in the week to June 21, down from 81% the previous week, farm office FranceAgriMer said on Friday.

The world’s top palm oil exporter last week said it will change its levy structure for palm oil exports, cutting the ceiling rate for crude palm oil levies (CPO) from $255 to $175 per tonne after criticism from stakeholders.

The European Commission on Thursday trimmed its forecast of usable production of common wheat in European Union’s 27 member countries in 2021/22 to 125.8 million tonnes from 126.2 million estimated last month.

Egypt’s state buyer bought 180,000 tons of Romanian wheat on Monday in its third tender booking for the new season, with total purchases running about 19% below a similar time last year.

Key highlights of the tender: 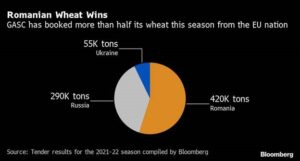 WHEAT/CEPEA: Sowing advances in both Brazil and Argentina

Cepea, June 28 – Agents from the wheat market are keeping an eye on crops. In Brazil and in Argentina, wheat sowing is advancing, and farmers are closely watching out for crops and the weather. In general, wheat crops have developed well in both countries, and the output may set a record in Brazil.

In Paraná (PR), until June 21, wheat sowing had reached 92% of the area estimated for the state, according to Seab/Deral, with 95% of crops in good conditions, and 5%, in average conditions. So far, rainfall has been satisfactory, and the frosts registered in the state did not damage the wheat crops, which are still tolerant of low temperatures. In the report released this month, Seab/Deral revised up estimates for the wheat area in PR to 1.18 million hectares (against 1.14 million hectares last season), and the harvest is expected to total 3.87 million tons, a record.

In Rio Grande do Sul (RS), wheat sowing has surpassed a million hectares, according to Emater/RS, area 13.29% larger than that in 2020. The output in RS is expected to total 2.89 million tons, 37.81% up from that in the previous season.

In Argentina, according to information from the Bolsa de Cereales (Buenos Aires Grains Exchange), 70.9% of the area allocated to wheat crops had been sown until June 23, an advance of 13.5 percentage points in the week. Almost all crops (95.4%) are in normal and excellent conditions.

In its monthly update, the inter-governmental body raised its global corn production outlook by 7 million tonnes to a record 1.201 billion tonnes.

The report noted, however, that despite record crops of corn and wheat there would only be a marginal rise in global grain stocks in 2021/22.

European Union soybean imports in the 2020/21 season that started last July had reached 15.03 million tonnes by June 27, data published by the European Commission showed on Monday.

That compared with 15.25 million tonnes cleared by the same week last season, the data showed.

Since Jan. 1, the European Commission’s data has covered the EU’s 27 countries only, whereas previous figures up to Dec. 31 covered both the EU-27 and Britain.

The government at the world’s top palm oil producer has issued a revised rule on palm oil that will cut the maximum rate imposed on shipments of the tropical oil, said Musdhalifah Machmud, deputy for food and agriculture and the Coordinating Ministry for Economic Affairs, by phone Tuesday.

China’s hog market looks to have bottomed out after a rout in prices tripped the government’s new alert system for the first time, prompting a notice that the authorities will begin buying pork for national stockpiles.

Wholesale pork prices have fallen more than 50% this year, which left many farmers losing money on their herds, although hog futures in Dalian actually began to recover last week after the sale of super-fat pigs came to an end and as low prices attracted consumers. The anticipation of government intervention also probably played its part in the turnaround.

The new warning system, announced earlier this month, is based on a ratio of hog prices to the cost of the corn used as animal feed. China often uses state stockpiles to intervene in agricultural markets, although recent efforts have centered on releasing grain reserves to cool markets after a recovery in the hog herd from the ravages of African swine fever forced up crop prices.

China is trying to strike a balance between damping inflation of staple foods, as part of its broader campaign to control commodities markets, while preventing declines in price that threaten rural economies and food security.

Biofuel Waivers for Refineries Will Be Limited, Trade Group Says