Chinese Ag futures (SEP 21) Soybeans down 75 yuan ; Soymeal down 6; Soyoil down 30; Palm oil down 2; Corn down 4 — Malasyian Palm is up 98. Malaysian palm oil prices overnight were up 98 ringgit (+2.86%) at 3519 on track for its first weekly advance since early June on expectations of higher exports from second-biggest grower Malaysia, and support from strong soybean oil and petroleum prices.

U.S. farmers seen planting 2.6m acres more of corn this year than previously expected, according to the avg est. of as many as 30 analysts surveyed by Bloomberg.

Russia Raises Wheat Export Tax to $41.30/Ton for Next Week

Russia’s wheat export customs duty will rise to $41.30/ton from $38.10/ton currently, the Agriculture Ministry said Friday on its website.

The amount of France’s soft-wheat crop rated in good or very good condition fell to 79% in the week to June 21, down slightly from the prior week, FranceAgriMer data showed on Friday. 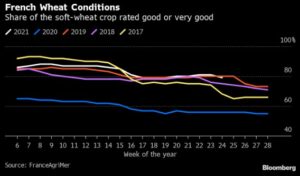 Shipments during the period rose 6% from 1,107,570 tons exported during May 1-25, according to AmSpec Agri on Friday.

That’s a 1.4% reduction from 66.2m tons estimated in May and a drop of 22% versus the initial forecast in January, Agroconsult said in report.

The downgrades come amid lower grain production expectations for countries including Poland and Romania, while French prospects have improved, according to a report from the European Commission.

The hog herd totaled 75.653m head on June 1, according to the USDA report released Thursday on its website.

World grain stockpiles in the 2021-22 season are now estimated at 597m tons, the International Grains Council said in an emailed report.

Shipments along the Mississippi, Illinois, Ohio and Arkansas rivers declined in the week ending June 19 from the previous week, according to the USDA’s weekly grain transportation report.

Some farms in the Canadian prairie province received much-needed rain in the past week, but most need more to sustain crop and pasture growth, Saskatchewan government said Thursday.

Malaysian palm oil company IOI Corporation said on Friday it had been made aware of a letter from the U.S. Customs and Border Protection (CBP) about opening an investigation into allegations of labor abuses at the company.

According to IOI, CBP in the letter to a labor activist acknowledged the receipt of a petition providing information on alleged forced labor conditions at the company and found it sufficient to open an investigation.