China’s Progress on U.S. Trade Deal Slows Again In May

Malaysian palm oil prices overnight were down 6 ringgit (-0.18%) at 3385 bouncing back on an overnight jump in soybean oil prices and signs of a recovery in shipments from second-biggest grower Malaysia.

In week ending June 17, according to the USDA’s weekly inspections report.

China soybean imports totaled 9.0 million tons in May, lower than last May. On the other hand, June imports are projected at 11.6 million tons, the all-time high monthly imports, primarily due to massive arrivals of Brazilian soybeans (11.4 million tons). In addition, 8.3 million tons of soybeans have departed from the loading ports and will arrive in China in July. According to Refinitiv’s trade flows, majority of imports in June/July will be originated from Brazil. Meanwhile, China resumes soybean imports from Argentina and Uruguay in June/July after negligible imports over the past half year.

Total imports during the first half of 2021 are projected at 46.9 million tons, compared 42.4 million tons for last year’s same period (up 11%). After taking into account rapid imports in the first six months and currently fast deliveries of Brazilian soybeans, China’s demand for the U.S. new crop soybeans that will be harvested in late August/early September will likely be much weaker than a year ago.

The export levy begins when the reference CPO price is at $750 per tonne, with a $20 increase for every $50 rise in the price. The maximum tariff for when CPO prices are above $1,000 will be flat at $175, the finance minister said.

The previous regulation stipulated a $15 levy increase for every $25 jump in crude palm prices.

Brazilian soybean exports in June slow down pace and are below 2020, says Secex

The average daily shipment of soybeans from Brazil slowed, reaching 582,000 tons by the third week of June, a volume already below the 606.74 thousand tons per day of the same month last year, federal government data showed Monday.

By the previous week, the world’s largest producer and exporter of the oilseed shipped 637.56 thousand tons per day, still exceeding the June 2020 average, said the Secretariat of Foreign Trade (Secex).

China’s Progress on U.S. Trade Deal Slows Again In May

China’s imports of American goods slowed again in May, putting the purchase targets agreed with the U.S. in the 2020 trade deal even further out of reach.

China bought almost $10 billion worth of manufactured, agricultural and energy goods from the U.S. in May, the lowest monthly total since October 2020. That took total imports to almost $157 billion since January 2020, 41.4% of the targets the two nations agreed at that time. 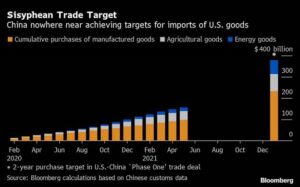 China’s hog population rose 24% in the year through May and has now almost fully recovered from the recent resurgence in African swine fever, according to the country’s agriculture ministry.

Herd sizes are close to normal for this time of year, Xin Guochang, an official at the ministry’s animal husbandry bureau, said in an interview on state television. Meanwhile, around 3.5 million of low-productivity breeding sows were culled in the first five months of the year, he said, which should lead to an improvement in herd fertility.

Dry conditions affect much of Canada’s agricultural areas and timely rains are needed to reach expected yields, Agriculture and Agri-Food Canada said in a monthly report.

The United States and Brazil, the world’s top two ethanol producers, are expected to hold down production in coming months because of the surging cost of corn and sugar.

Tight corn and sugar supplies are passing through to ethanol costs, making producers reluctant to raise production, and boosting gasoline prices as well. The United States and Brazil are the linchpins of worldwide ethanol supply, accounting for 75% of global ethanol exports last year, according to S&P Global Platts Analytics.

U.S. gasoline prices on average are above $3 per gallon for the first time since 2014, American Automobile Association data shows, while prices in Brazil are at 5.40 reais per liter ($4.06 per gallon) in June in Sao Paulo state, near all-time highs.

Ethanol usually helps lower gasoline prices, said Scott Irwin, a professor at the University of Illinois, as it tends to be an inexpensive source of needed octane for gasoline. However, at current market prices, ethanol is actually adding to gasoline’s cost.

Wheat prices dropped sharply in the Brazilian market last week, influenced by international devaluations and the dollar depreciation against the Real, which reduces the import value.

Still, Cepea collaborators have reported that the wheat from last season still available in the market may not be enough until the harvesting begins. Thus, the imports pace continues fast.

Brazil’s Monetary Council approved the terms and conditions for the government’s agriculture financing program known as Plano Safra 2021/22, Valor Economico newspaper reports without citing how it obtained the information.

Yields for EU soft-wheat, barley and rapeseed crops should be “firmly” above the five-year average, the EU’s Monitoring Agricultural Resources unit wrote Monday in a report.

Ukraine had favorable weather through May, but recent stormy conditions are expected to lower wheat quality and quantity, the EU’s Monitoring Agricultural Resources unit said Monday in a report.

Glencore’s Viterra Rus, a member of the Union of Grain Exporters, shipped 28,500 tons of wheat with 12.5% protein to Algeria, the Russian union said in a statement.

Ukraine wheat, corn, barley prices down over past week -APK-Inform

Logistical challenges affecting the container shipping sector and high freight costs are serious issues and headwinds for the industry, according to Olam International Ltd., one of Asia’s largest farm commodity traders and suppliers.

Smithfield Foods Inc.’s largest pork-processing plant, located in Tar Heel, North Carolina, was delisted from being eligible to export to Mexico as of June 16, according to a notice on the U.S. Department of Agriculture website.

A consumer advocacy group is suing Smithfield Foods Inc. for allegedly fueling fears of a meat shortage during the pandemic to boost demand and prices for its products.

Food & Water Watch filed a lawsuit on June 16 in Washington, D.C., claiming Smithfield, the top U.S. pork producer, sought to drive up demand even as it had ample reserves in cold storage and increased exports, mostly to China. The lawsuit also alleges the company misled the public about safety measures for its workers.