Canola processing declined 4.4% in August from a year ago, according to Statistics Canada data released Monday on agency’s website. 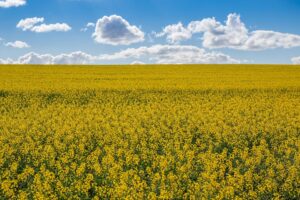 Western Midwest Forecast: Mostly dry through Friday. Temperatures near to below normal through Thursday, near to above normal Friday.

US Inspected 459k Tons of Corn for Export, 258k of Soybean

In week ending Sept. 22, according to the USDA’s weekly inspections report.

Following is a summary of USDA inspections for week ending Sept. 22 of corn, soybeans and wheat for export, from the Grain Inspection, Packers and Stockyards Administration, known as GIPSA.

US corn stocks seen at 1.5b bu as of Sept. 1, an increase of 21% compared to the same period last year, according to the avg est. of as many as 27 analysts surveyed by Bloomberg.

This compares with 0.1% a week earlier and 1.3% a year ago, consultancy firm AgRural says in a report.

“Exceptionally high” grain production is expected in Russia in 2021-22 due to favorable weather conditions, the EU’s Monitoring Agricultural Resources unit says in a note.

China’s state planner said on Tuesday it will release its fourth batch of pork reserves for the month this week, as average retail pork prices last week were 30% higher than a year ago.

Ukraine on Monday urged the European Union to support its plans to make the emergency paths for grain exports through the bloc permanent, with investment in at least five border terminals and a pipeline through which sunflower oil would flow.

Ukraine’s agriculture minister Mykola Solsky told EU counterparts and the European Commission his country needed financial support to reduce its reliance on Black Sea exports that Russia had blocked and could hinder again.

Its grain and sunflower seed exports have risen from 200,000 tonnes in the month after Russia’s Feb. 24 invasion to 4.5 million tonnes in August, helped by a July deal to unblock ports, but most still following overland corridors through Europe.

“We think these corridors should become stable and permanent,” Solsky told a news conference after a meeting in Brussels.

He said Ukraine needed help to increase its fleet of trucks, adding a rise to 16,000 from 12,000 now could allow 10-20 million tonnes of cereals to cross land borders per year.

Ukraine, one of the world’s largest grain exporters, normally supplies around 45 million tonnes of grain to the global market per year.

Five border terminals should be built, costing $25-30 million each. The cost of a sunflower oil pipeline would depend on its route.

Solsky recognised shipping was cheaper, but for crops in western Ukraine the distance to Baltic ports was no further than to the Black Sea, where Ukraine would face an “unpredictable neighbour” even after the war.

“To have an alternative route is a must, routes through friendly democratic countries in order to continue business,” he said.

Agriculture commissioner Janusz Wojciechowski said he would ask the EU executive to assess ways for the bloc to finance such initiatives.

Estimates pointing to record international trades and water shortage in some areas with wheat crops in Argentina and in the southern part of the Great Plains in the United States boosted wheat prices abroad in the last days. The intensification of the Russia-Ukraine war, which may hamper grains exports from the Black Sea, helped to push up quotations. According to data from the USDA, Ukraine is expected to export 11 million tons of wheat in the 2022/23 season, the lowest since the 2013/14 crop. This scenario limited devaluations in Brazil.

BRAZILIAN MARKET – Although the scenario abroad limited wheat devaluations in Brazil, the domestic quotations have been influenced by both expectations of a record output in Brazil and the arrival of the 2022/23 crop at the market, majorly in Paraná and São Paulo. In Rio Grande do Sul, farmers expect a large harvest too, based on the current favorable weather conditions

Besides, the demand of Brazilian mills continues weak, due to the current low sales of wheat by-products. According to agents consulted by Cepea, most of them have reduced processing.

CROPS – With rainfall limiting the wheat harvesting in Brazil, activities did not advance much last week. In Paraná, 28% of the crop had been harvested by September 19. Of the areas not harvested yet, 79% are in good conditions; 18%, in average conditions; and 3%, in bad conditions.

In Rio Grande do Sul, according to EmaterRS, the weather has been favorable to crops development, and farmers have high expectations for the season. However, new rains are still crucial to raise soil moisture. As for the national crop, 14.3% had been harvested by early last week, according to Conab.

Indonesia plans to fine a quarter of its oil palm plantations that are not properly registered instead of imposing criminal punishment, said Coordinating Investment & Maritime Affairs Minister Luhut Panjaitan.

Dutch to cull around 201,000 chickens to contain bird flu

The Netherlands is to cull around 201,000 chickens on a farm in the northern city of Emmen after the detection of a highly infectious strain of bird flu, the government said on Monday.

Twelve cases of the highly lethal form of avian flu have been reported in the Netherlands this month, following dozens of cases earlier in the year.

France has also seen a resurgence in cases after experiencing its worst-ever bird flu wave earlier this year.

The spread of bird flu around the globe has raised concerns among governments and the poultry industry due to its ability to ravage flocks, generate trade restrictions and the risk of human transmission.

The risk to humans is considered low, but past outbreaks among farm birds have needed extensive culling programmes to contain them.

US Hog and Pig Inventory Survey Before USDA Report

The US hog herd as of Sept. 1 seen falling 0.8% from a year earlier to 74.25m head, according to the average in a Bloomberg Survey of seven analysts.