Global Ag News for May 24

Malaysian palm oil prices overnight were down 92 ringgit (-2.31%) at 3899 nearing its lowest settlement in three weeks, dragged down by soybean oil and amid concerns that lockdowns in India to halt the spread of Covid-19 are weakening demand.

Basis bids for corn shipped by barge to the U.S. Gulf Coast and loaded for export remained firm on Friday, supported by strong demand from China, while soybean bids rebounded from midweek declines, traders said.

Vicentin continued to lease its crushing and storage plants to rivals in April, bringing in $7.2m for the month to the bankrupt agriculture trader, the company’s board said in a report to creditors sent by an outsourced PR firm. Vicentin had other revenue streams including $2.1m in exports of refined vegetable oil.

Cepea, May 21 – Soybean prices have dropped in Brazil this week, due to the absence of purchasers in the domestic market and also because of international devaluations and the dollar depreciation against Real. Lower demand in the Brazilian market is linked to the also weak demand for soybean meal, since most purchasers have built inventories of this by-product.

As regards soy oil agents from the Brazilian food sector claim difficulties to purchase the product, which is pushing up quotes in the domestic market. Lower oil supply is linked to the fact that some Brazilian processors began the maintenance period ahead of schedule, as a strategy to keep their crush margin.

According to data from Abiove (Brazilian Association of Vegetable Oil Industries) released on May 14, soybean crushing in the first quarter of 2021 was 20.4% lower than that in the same period last year – these data accounts for 85% of the monthly sample.

Seven grains ships stranded at Argentina’s export hub of Rosario will be towed free and sent out to sea after they were loaded with more produce than could be carried on the port’s increasingly shallow waters, local authorities said on Friday.

Rosario traffic has been snarled in the aftermath of a 48-hour strike by tugboat captains and other workers managing the flow of agricultural cargo ships.

Seven ships, six of them large Panamax vessels, loaded with soymeal, corn and other farm products were moored at Rosario during the work stoppage. After the strike they were unable to embark because they had been loaded with more cargo than could be carried on the port’s increasingly shallow waters.

“They will start leaving Saturday morning,” he added. Once the ships are towed to the main channel of the Parana River they will be able to sail south past Buenos Aires to the Atlantic.

Paraguay and Brazil have agreed to release water from the Itaipu dam in order to facilitate barge traffic that had been stalled by the shallowness of the Parana.

But the labor issues are not over. The strike is set to resume for another 48 hours next week if union demands over access to COVID-19 vaccines are not met, labor leaders say.

The Parana has been depleted by dry weather in Brazil, where the river starts. Its shallowness is shaving tonnage off allowable cargos, and meteorologists do not expect the navigability of the waterway to improve over the short term.

Australia’s canola harvest may exceed last year’s record of 4.28m tons as buoyant prices have encouraged farmers to devote more land to the oilseed, according to the Australian Oilseeds Federation’s May crop report.

China’s imports of American goods slowed in April, pulling back on the already incremental progress toward the purchase targets agreed with the U.S. in the 2020 trade deal. 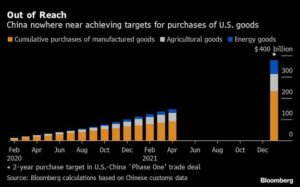 China bought $10.4 billion worth of manufactured, agricultural and energy goods in April, taking the total in the 16 months since the trade deal was signed in January 2020 to $147 billion, according to Bloomberg analysis of official Chinese data. That progress was the slowest pace this year and reached 38.9% of the two-year target of $378 billion, compared to March’s 36.1%.

There’s no sign of when the two sides might next talk about the deal, although the U.S. side said it would meet with China to discuss it “soon.”

CORN/CEPEA: Prices follow opposite trends among regions; liquidity is low in BR

Corn prices have followed opposite trends in the Brazilian market this week, depending on the region. Steeper devaluations were observed in Paraná and Mato Grosso do Sul. Besides the expectations for better weather conditions in Brazil, price drops in Argentina and the dollar depreciation against Real led some Brazilian purchasers to resume importing corn. On the other hand, in São Paulo and in Rio Grande do Sul, prices rose slightly – some regions in these states only produce the summer crop, which is leading farmers to limit the volume available for sale.

In Rio Grande do Sul, 88% of the summer crop has been harvested, according to Emater/RS. As the soybean harvesting has advanced, corn activities are expected to step up.

In Paraná, according to data from Seab/Deral, 99% of the summer crop had been harvested until May 17. As for the second crop, 98% of the area has been sown, and 23% of crops are in good conditions; 46%, in average conditions; and 31%, in bad conditions.

Ukrainian wheat export prices have reversed its trend direction, having lost $6 a tonne over the past week thanks to improved crop forecasts in key production regions, the APK-Inform agriculture consultancy said on Saturday.

Ukraine’s agriculture ministry has increased forecast for 2020/21 barley exports to 4.15 million tonnes from the previous outlook of 4.0 million, the ministry’s data showed on Saturday.

Russia’s grain export estimates for May by Sovecon consultancy

Russia’s May exports of wheat, barley and maize (corn) are estimated at 2.0 million tonnes, up from 1.1 million tonnes in April, the Sovecon agriculture consultancy said.

Expressing concern over rise in animal feed prices in the domestic market, the All India Poultry Breeders Association (AIPBA) on Sunday demanded the government to reduce import duty on soybean meal to zero for at least five months. Soybean meal remains the most common protein source for all compound feeds for poultry, dairy cattle and pigs in the country and worldwide.

Alberta Crop Planting Ahead of Average at 71% Seeded

Seeding of Alberta crops are ahead of the five-year average of 56%, the provincial government said in a report Friday.