Global Ag News for May 12

Malaysian palm oil prices were up 174 ringgit at 4,524 (basis July) at midsession, a record high.

U.S. Weather Forecast: The most significant changes of rainfall in last evening’s GFS model run were in the May 19 – 23 timeframe. Last evening’s run was notably wetter in much of the Corn Belt, Delta, and Oklahoma and the evening run was notably drier in western and southern Texas and in Georgia and South Carolina.

China’s 2021/22 corn output is expected to rise by 4.3% on increased acreage and yields, the agriculture ministry said on Wednesday. China was expected to produce 271.81 million tonnes of corn in the 2021/22 year, up from 260.67 million tonnes a year ago, the Ministry of Agriculture and Rural Affairs said in a report. This year’s corn planting acreage was seen up 3.4% at 42.67 million hectares, as farmers were willing to expand the planting area on better benefits, the ministry said in the monthly China Agriculture Supply and Demand Estimates (CASDE).

Meanwhile, soybean acreage was seen down 5.4% from a year earlier, at 9.35 million hectares, as some farmers in main production areas switched to corn.

Growth of China’s soybean consumption and imports in 2021/22 was expected to slow as pig production levels gradually recovered to normal levels, the report said.

Union workers at Brazil’s Santos port on Tuesday delayed a possible strike until next month, amid demands to know how soon they will be vaccinated against COVID-19, a union official said. Union workers held a meeting on Tuesday to decide on whether to go on strike, with initial plans for a work stoppage this week.

Wire story reports market analysts predict both U.S. and Brazilian agencies on Wednesday will slash Brazil’s corn crop due to relentless dry weather in some key areas, though the expected cuts might not be big enough as May is forecast to be very light on the moisture. A smaller second corn harvest, the one Brazil most heavily exports, could drive even more business to the United States at a time when record purchases from China are anchoring the U.S. export program, a trend that is seen continuing into next year. Brazil’s increase in plantings of second corn, or safrinha, amid favorable prices was expected to offset some of the potential yield limitations from the later sowing, but the weather is not cooperating. The late start for safrinha means that ample rainfall is important this month, and the prospects do not look great. 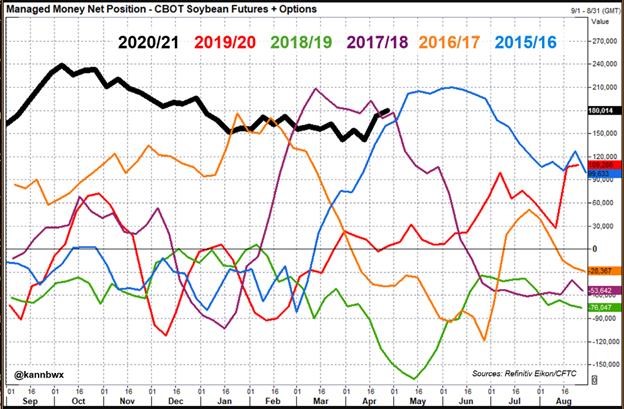 Russia’s April exports of wheat, barley and maize (corn) are estimated at 2.1 million tonnes, down from 2.4 million tonnes in March, the SovEcon agriculture consultancy said.

Russian wheat export prices rose in the first 10 days of May, supported by higher prices in Chicago and Paris on corn supply concerns and despite low market activity during Russia’s May 1-10 official holiday, analysts said. Russian wheat with 12.5% protein loading from Black Sea ports for supply in June was at $278 a tonne free on board (FOB) at the end of last week, up $13 from late April, the IKAR agriculture consultancy. Sovecon, another consultancy, said that wheat prices rose by $4 to $274 a tonne, while barley was up $2 at $247 a tonne.

Russia wheat export pace has remained at 5-year lows since the government imposed a 50 euros per tonnes export tax for wheat in March.

Traders have used around 87% of the total wheat export quota of 17.5 million tonnes imposed for the whole 2020/21 July-June season.