Global Ag News for May 10

Malaysian palm oil prices were down 78 at 4,349 (basis July) at midsession still correcting gains after prices had best week in two decades.

There is still concern over crop and field conditions in parts of the Delta because of wet conditions and in the heart of the Midwest because of wetter biased weather over the next two weeks.

South America Weather Forecast: Brazil is to see temporary relief in areas that receive rain in Parana and some immediate neighboring areas during the next ten days. Some relief is also expected in eastern Sao Paulo and southeastern Minas Gerais, but the amount of rain that reaches key Safrinha corn country will be very low. Parana will be the greatest recipient of rain and could experience the greatest dryness relief, but central and eastern parts of the state will be wetter than western areas. Temperatures will be near normal except in the far south of Brazil where readings will be cooler biased both this week and next week. Crop moisture stress will continue without significant relief despite a few insignificant showers in Mato Grosso, Mato Grosso do Sul, Goias, western Sao Paulo and southwestern Minas Gerais.

Argentina’s weather will be ideal for summer crop maturation and harvest progress. The environment might also be good for some early season wheat planting later this month

Speculators’ bullishness toward Chicago-traded grains and oilseeds has hovered near record levels since late last year as global demand accelerates and supplies tighten, though various market participants have recently been in the driver’s seat when it comes to the persistent rally, especially in corn. In the week ended May 4, speculators in the “other” category increased their net long to 133,068 futures and options contracts from 107,963 a week earlier according to the U.S. Commodity Futures Trading Commission. That coincided with a 6.5% gain in most-active futures. 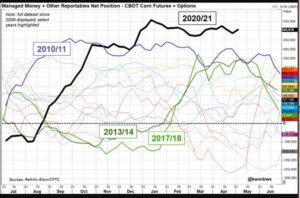 Stocks of canola plunged by 37.7% at the end of March 2021 compared to the same period in 2020, in part due to increased demand during the COVID-19 pandemic, according to a farm survey by Statistics Canada released on Friday.

China sold 142,659 tonnes of wheat, or 3.56% of the total offered, at an auction of state reserves last week, the National Grain Trade Center said. The volume sold, at an average price of 2,401 yuan ($373.41) per tonne, declined further from the prior week when 361,975 tonnes of wheat were sold, after the government moved in to restrict the auctions.

Chinese buyers bought 1.36 million tonnes of U.S. corn, matching their seventh biggest ever purchase of U.S. supplies of the grain, the U.S. Agriculture Department said on Friday. The deal comes after China issued guidelines in April recommending the reduction of corn and soymeal in pig and poultry feed. Corn prices have surged to their highest in more than eight years on concerns about a tightening global supply base due to strong demand in biofuels and dry conditions in key growing areas of Brazil. The corn will be shipped during the 2021/22 marketing year that starts in September. The deal was China’s biggest since it booked a deal to buy 2.1 million tonnes of U.S. corn, its most ever from the United States, in January.

Maize planting in the European Union is in full swing as farmers catch up on a slow start during a chilly April, with warmer and wetter weather needed this month to get the crop off to a good start. Early forecasts project the 27-nation EU, a major producer and importer of maize (corn) for livestock feed, will harvest a bigger crop this year, as yields in Romania and other nations recover from drought in 2020 and the EU crop area stays stable. French farmers were in the latter stages of planting, having accelerated field work since an early April freeze. But the proportion of emerged crops was lower than it was a year ago, according to farm office FranceAgriMer, a sign that dry, cool weather has hindered germination.

Euronext wheat ended higher on Friday, adding to a weekly gain, as grain markets rallied further on corn supply tensions. September milling wheat on Euronext settled up 1.75 euros, or 0.8%, at 232.00 euros ($281.97) a tonne, leaving the contract 5.8% higher over the week. It rose earlier on Friday to 233.25 euros but faced chart resistance near last week’s life-of-contract high of 233.50 euros.

On Euronext’s maize (corn) market, June futures rose as high as 265.00 euros a tonne, a front-month price not seen since July 2012. New-crop November set a new contract high at 225.50 euros.

Malaysia’s palm oil exports during the May 1-10 period are estimated to have risen 37% from a month earlier to 469,875 metric tons, cargo surveyor AmSpec Agri Malaysia said.