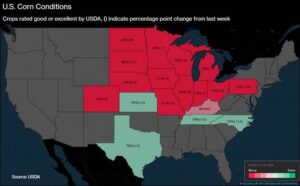 Chinese Ag futures (SEP 21) Soybeans down 61 yuan ; Soymeal up 15; Soyoil down 164; Palm oil down 198; Corn down 26 — Malasyian Palm is down 85. Malaysian palm oil prices overnight were down 85 ringgit (-2.06%) at 4044 headed for its biggest drop in more than two weeks on concerns about dwindling exports and a rise in output in second-biggest grower Malaysia.

Managed funds were net sellers of wheat and soymeal, even corn and bought soybeans and soyoil.

In week ending June 3, according to the USDA’s weekly inspections report.

BUENOS AIRES, June 7 (Reuters) – Grain exports from Argentina were likely to be affected by a seven-hour strike by customs officers on Tuesday, as the officials press for priority access to coveted COVID-19 vaccinations, the port manager said on Monday.

Such a short work stoppage was not expected to have a major impact on shipments from Argentina. But shipments could get bogged down if longer strikes are called.

Wheat shipments for the current season totaled 36.8m tons as of June 3, the Federal Center of Quality & Safety Assurance for Grain & Grain Products said on its website, citing inspections before exports.

The winter-rapeseed harvest in France is seen at 2.95m tons, down 9.2% y/y and the smallest crop since 2001, France’s agriculture ministry said Tuesday in a report.

EU Soft-Wheat Exports at 24.7m Tons in Season Through June 6

Shipments during the season that began July 1 amounted to 24.7m tons as of June 6, versus 33.3m tons in the same period a year earlier, the European Commission said on its website.

Ukraine’s 2021 wheat crop is now seen at 28.8m tons, up by 1.2m tons from a May estimate, Kyiv-based researcher UkrAgroConsult says in a report.

In Quebec, Neste Oyj aims to build a refinery that would use forestry waste such as treetops and branches to produce renewable diesel, Jeremy Baines, president of the Finnish company’s North American operations, said in an interview.

The search for additional feedstocks comes as demand strains availability of traditional biofuel ingredients like soy oil, contributing to food inflation and destruction of forests to plant crops. More fossil-fuel companies are entering the market, and U.S. production capacity for renewable diesel is expected to jump almost sixfold by the end of 2024, according to JPMorgan Chase  Co. Neste said it isn’t worried about heightened competition for raw materials.

Russia started the formula-based grain export tax on 2 June 2021, which is lower than the 50 euros per tonne export tax for wheat imposed during March-May 2021. The Russia line-up data (released on 7 June) shows that 1.8 million tons (mmt) of wheat were delivered or waiting for delivery in Russia so far, significantly above wheat exports in May (0.45 mmt). 2020/21 Russia wheat exports (July/June) may end at 35.3 mmt, well below USDA’s May projection of 39.5 mmt.

Argentina wheat exports continued to decline as the peak exports season passed. Refinitiv trade flows tracked 0.6 million tons of wheat exports in May, down 17% from a month ago, but 25% above the 5-year average exports for the month. Assuming the relatively strong export pace through November, wheat exports for 2020/21 are estimated at 9.4 mmt, down about 20% from last season.

Purchases by the world’s top importer will probably drop to 650,000 tons this month from a four-month high of 771,000 tons estimated for May as global prices make processing less attractive, according to G.G. Patel, managing partner of GGN Research.

Australia on Tuesday raised its wheat production forecast during the 2021/22 season by 11.2% from a forecast three months ago after rains across several major growing regions improved the prospects for yields.