Malaysian palm oil prices overnight were down 22 ringgit (-0.53%) at 4136 on expectations that stockpiles may hit an eight-month high in No. 2 grower Malaysia, with traders weighing a potential move by Indonesia to cut its export levy.

China is likely to continue its robust imports of wheat in the current marketing year that began in June due to strong demand for animal feed and as the grain is used to substitute expensive corn, China National Grain and Oils Information Center said in a report Friday.

Palm Oil Reserves in No. 2 Grower May Climb to Eight-Month High

Palm oil inventories in Malaysia probably swelled to an eight-month peak in May as production in the world’s second-biggest grower advanced and exports stagnated.

Stockpiles gained 5.2% from a month earlier to 1.63 million tons, according to the median of 11 estimates in a Bloomberg survey of analysts, traders and plantation executives. That’s a third monthly increase.

Crude palm oil production rose 2.6% to 1.56 million tons, according to the survey, the highest level since October. Still, the pace of growth slowed from 7% in April and 28% in March, preventing a bigger rise in inventories of the tropical oil, used in everything from chocolate to lipstick and soap.

High Covid-19 cases in Malaysia will prolong a freeze on the intake of foreign workers and worsen labor shortages in the second-biggest producer, according to Ivy Ng, head of research at CGS-CIMB in Kuala Lumpur.

French Wheat, Corn Ratings Steady in Week to May 31: AgriMer

The amount of France’s soft-wheat crop rated in good or very good condition was flat at 80% in the week to May 31, and corn ratings were also unchanged, FranceAgriMer data showed on Friday. 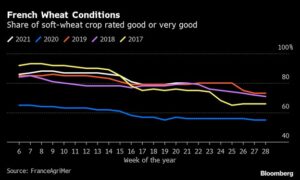 The Indonesian government is in discussions to revise its palm oil export levy to boost shipments of the world’s most consumed vegetable oil, according to people with knowledge of the matter.

The following table shows the percent of U.S. agricultural production within an area that experienced drought for the week ending June 1, according to the USDA’s weekly drought report.

Grain shipments from France’s Rouen port totaled 136,835 tons, compared with 41,500 tons a week earlier, according to an emailed report. Soft wheat in tons

Estimate ranges are based on a Bloomberg survey of five analysts; the USDA is scheduled to release its export sales report on Friday for week ending May 27.

According to the U.S. Department of Energy’s weekly petroleum report.

Shipments along the Mississippi, Illinois, Ohio and Arkansas rivers declined in the week ending May 29 from the previous week, according to the USDA’s weekly grain transportation report.

The long-term outlook for agriculture is improving and will continue to do so beyond 2021, despite recent price volatility in corn and soy, Corteva Inc. Chief Executive Officer Jim Collins says Thursday at a conference.

Russia has set out its grain export taxes for June 9-15, the agriculture ministry said on Friday. The wheat export tax for the period will be at $29.40 a tonne, it said. For barley and maize the tax will be $39.60 and $50.00 a tonne respectively.