Malaysian palm oil prices overnight were up 74 ringgit (+1.81%) at 4166 with a weather-driven rally in Chicago soybean oil and signs of higher imports by second-biggest buyer China boosting sentiment.

Output and stockpile projections for the week ending May 28 are based on nine analyst estimates compiled by Bloomberg.

China, the world’s biggest buyer of soybeans, has slowed purchases of the oilseed due to negative crush margins, the China National Grain and Oils Information Center said in a report on Thursday.

JBS Plants Limp Back From Hack With Old-School Manual Labor

JBS SA workers returning to a meat-processing plant in Texas on Wednesday afternoon were told to be ready to do things a bit differently than normal: Work by hand. With everything from knife sharpening to production-line speed controls relying on automation, coming back from a cyberattack that forced the world’s largest meat producer to halt operations across the globe is set to be a bumpy ride. Because the plants are coming back online without some of their systems in service, there will be a lot more manual work than usual.

Sunflower crops in the Black Sea region, which were curbed by drought last year, face some risk this season due to recent heavy rains and cool temperatures, Vaja Jhashi, head of Moldova-based oilseed crusher Trans-Oil Group, said Wednesday in an interview.

The drought in Brazil is so severe that some farmers are reneging on their sales contracts, a sign that the turmoil seen in agricultural markets this year isn’t over.

Lawsuits and contract renegotiations are occurring between growers who have suffered massive production shortfalls and the trading firms that buy the crops and ship them around the world.

Such moves could result in delays and losses for buyers at a time when supplies are already strained and food inflation is a growing fear. That’s no small thing as Brazil’s crops are used in everything from Starbucks coffee to Coca-Cola. It’s the No. 1 shipper for sugar, soybeans and high-end arabica coffee beans. It ranks No. 2 behind the U.S. for corn.

Brazilian farmers are losing their crops to dry weather, and while that’s led to a impressive rally, sales contracts for their products were made earlier at far cheaper rates. During Brazil’s soybean harvest in February, some growers refused to honor sales agreements, and trading firms sued. With harvests for coffee and corn coming up in a matter of weeks, there are fears more of the same could be ahead, with some producers signaling they’ll break contracts.

Brazilian farmers grew a record 137M metric tons of soybeans in the 2020-2021 season, agricultural consultancy Datagro says, raising the number from the 136.3M tons the group estimated in April. The consultancy reduced its forecast for the country’s total corn crop to 101.7M tons, down from its April forecast of 105.5M tons. Brazil produced a record 106.8M tons of corn in the 2019-2020 season.

U Soft-Wheat Exports at 24.5m Tons in Season Through May 30

Shipments during the season that began July 1 amounted to 24.5m tons as of May 30, versus 32.7m tons in the same period a year earlier, the European Commission said on its website.

The southwest monsoon, which waters more than half of India’s farmland, reached the mainland two days later than usual, with the sowing of major crops such as rice and soybeans seen gathering momentum in the coming weeks.

The monsoon hit the southern coast on Thursday, Mrutyunjay Mohapatra, director general of the India Meteorological Department, told Bloomberg by phone. It will further advance to some more parts of Kerala and Tamil Nadu states in the next two days, he said. The monsoon typically arrives in Kerala on June 1.

The June-September rainy season is critical for India’s crop output and economic growth at a time when the country is battling the world’s worst outbreak of Covid-19. The virus has spread to rural areas, where about 70% of the nation’s more than 1.3 billion people live. Agriculture accounts for 18% of its economy.

Brazil’s worst water crisis in almost a century will impact river navigation and make transportation of goods more expensive in the world’s largest exporter of commodities ranging from soybeans to coffee and sugar.

On Wednesday, Infrastructure Minister Tarcisio de Freitas said measures to save water and direct it to power generation would inevitably disrupt navigation on the Tiete-Parana waterway, which is suffering the most from a prolonged drought in the heart of Brazil’s farm country.

Freitas said the government will reduce the draft of ships on the Parana river basin, disrupting cargo movements to and from farm states like Goias, Minas Gerais, Sao Paulo, Parana and Mato Grosso do Sul. That basin forms part of Brazil’s fourth-largest waterway for cargo transport. 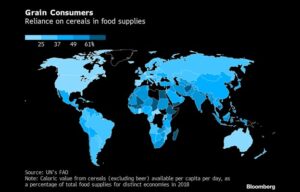 The prolonged gains across the staple commodities are trickling through to store shelves, with countries from Kenya to Mexico reporting higher food costs. The pain could be particularly pronounced in some of the poorest import-dependent nations, which have limited purchasing power and social safety nets as they grapple with the pandemic.

The UN’s index is treading at its highest since September 2011, with last month’s gain of 4.8% being the biggest in more than 10 years.

The surge has also stirred memories of 2008 and 2011, when price spikes led to food riots in more than 30 nations. The world’s hunger problem has already reached its worst in years as the pandemic exacerbates food inequalities, compounding extreme weather and political conflicts.

The federal govt has asked all fuel retailers in India to sell gasoline blended with 20% ethanol across the country from April 1, 2023, according to an official notification.

Argentine meat sales strike to end Wednesday, but could resume to include grains – farm groups

Argentine cattle ranchers will end their meat sales ban at midnight on Wednesday, but the protest over the government’s suspension of beef exports could resume to include a grains sales strike, the leader of a top farm group said. Argentina is the world’s No. 5 meat exporter, with most of its shipments destined for China. In a move to help control inflation, expected at about 50% this year, the government imposed a 30-day ban on meat exports.

Farmers in one of Canada’s key agricultural Prairie provinces can now receive up to C$500,000 ($415,282) to finance irrigation infrastructure, Saskatchewan government said in a release Wednesday.

Russia is introducing a grain damper mechanism as of June 2 which envisages floating duties for wheat, corn, and barley exports and putting funds received from them into subsidies for agricultural producers.

The duties will apply until June 8 inclusive and will be updated as of June 9. The size of the duties will be calculated weekly based on price indicators according prices under export contracts registered on the Moscow Exchange. The cut-off price will be $200 per tonne for wheat and $185 per tonne for barley and corn, and the duty will be 70% of the amount over these figures.

“Certainly this is going to have an impact on the prices of meat,” Rep. Henry Cuellar, co-chair of the Congressional Beef Caucus, tells Bloomberg Radio in an interview about the cyberattack on Brazilian food giant JBS.

Indonesia’s consumption of biodiesel fell 8.2% in the first four months of 2021 compared to the same period last year, data from the country’s producers’ association showed, as transportation demand remained muted due to the coronavirus pandemic.

India is considering reducing import taxes on edible oils after cooking oil prices hit record highs last month, two government and two industry officials told Reuters, to reduce food costs in the world’s biggest vegetable oil importer. While no decision has been made, the tax reduction could lower local prices and boost consumption, giving support to Malaysian palm oil FCPOc3, along with soy and sunflower oil prices, and dampening prices of local oilseeds such as rapeseed, soybean and groundnut. “A proposal to lower the import duty on edible oils is under review,” a government official with knowledge of the matter who asked to remain unidentified said on Wednesday.

India’s annual monsoon arrived on the Kerala coast on Thursday, the state-run weather office said, marking the start of the four-month rainy season crucial for the farm-dependent economy. Rains usually lash Kerala state, on India’s southwest coast, from around June 1 and cover the whole country by mid-July. Timely rains trigger the planting of crops such as rice, soybeans and cotton.

ARGENTINA OUTLOOK: Increasingly warm weather will overspread Argentina during the 10-day outlook. Temperatures will be near normal through 5 days before warming 2-4 °C above normal during the 6-10 day outlook in a pattern of widespread warmth. 10-day rainfall totals will be divided regionally, but most of the Pampas will receive deficits up to 15 mm (~0.6 in) as dryness prevails there. Warmth/dryness through 10 days in most areas of Argentina will be favorable for early wheat plantings.

ss Brazil during the 10-day outlook despite high rainfall that is likely to develop over the weekend. Temperatures will be 2-5 °C above normal in a widespread pattern over Brazil through 10 days, with the warmest conditions occurring this week. Rainfall totals through 5 days will be up to 25 mm (~1 in) below normal once again in most regions, with the driest conditions focused around Parana. However, the 6-10 day outlook will bring high rainfall to those same areas, with surpluses up to 125 mm (~5 in) relative to normal. Even if such rains verify as anticipated beginning this weekend, any benefits to 2nd crop corn would be minimal at the end of the grain fill period.