Chinese Ag futures (SEP 21) Soybeans down 44 yuan ; Soymeal up 6; Soyoil up 68; Palm oil up 48; Corn up 3 — Malasyian Palm is unchanged. Malaysian palm oil prices overnight were unchanged at 4151 with signs of weakening exports from Malaysia, the world’s second-biggest grower.

July 1 herd seen falling y/y to 11.319m, according to a Bloomberg survey of eight analysts.

Hot and dry conditions in Western Canada are causing “significant uncertainty” in estimating crop yields during the growing season, Agriculture and Agri-Food Canada said on Tuesday.

Soft wheat shipments during the season that began July 1 amounted to 371k tons as of July 18, compared with 794k tons in the same period a year earlier, the European Commission said Tuesday on its website.

Argentina’s government has urged citizens to limit water use in a bid to alleviate pressure on the Parana River, a key grains thoroughfare that is at a 77-year low, a situation which is hampering shipments of cereals including soy and wheat. The Parana, which has its source in southern Brazil, flows through Argentina to the coast near Buenos Aires. It is the transportation route for 80% of country’s farm exports and a source of drinking water, irrigation and energy. On the banks of the Parana are important cities such as Rosario, Parana and Santa Fe. Rosario is the main agro-industrial hub and river port of Argentina, a leading global supplier of soy, corn and wheat to global markets.

Argentine farmers have sold 25.1 million tonnes of soybeans from the current 2020/21 crop year, after transactions were recorded over the last week for 660,400 tonnes, the Agriculture Ministry said on Tuesday in a report with data updated through July 14.

China will auction 23,488 tonnes of corn imported from Ukraine at an auction on July 23, according to the country’s grain stockpiler Sinograin on Wednesday. The imported grain, stored at warehouses in Shandong and Guangdong provinces, was produced in 2020, according to a notice published on Sinograin’s website.

China forecasts a bumper harvest in 2021 as the country sees increasing summer and autumn grain planting acreage, the Ministry of Agriculture and Rural Affairs (MARA) said Tuesday. China has seen a stable increase in the planting acreage of autumn grain, which produces over 75 percent of the total grain in the country, MARA official Liu Lihua told a press conference. The planting acreage of autumn grain is expected to stand at 1.29 billion mu (86 million hectares) this year, with a particular increase in the cultivation of corn, said Liu. For summer grain, the acreage increased by 3.98 million mu this year, reversing the shrinking trend in the past five years, said Zeng Yande, an official with the MARA. Summer grain output recorded an all-time high of 145.8 million tonnes, up by 2.97 million tonnes from a year ago, data from the ministry showed. The yield of summer grain per mu reached 367.7 kilograms, marking a rise for three years in a row, the data showed. The country should speed up the harvest of autumn crops and prevent natural disasters to make sure that the grain output for the year maintains above the target of over 650 million tonnes, Liu said.

Prices of corn in China, the world’s biggest importer, fell to the lowest intraday level since November this week, just as global crop futures climb on scorching, dry weather in parts of the U.S. and Canada.

Futures on the Dalian Commodity Exchange sank to a low of 2,509 yuan a ton on Tuesday and traded at 2,515 yuan on Wednesday. They are down almost 15% from a record in January. Supplies seem plentiful for now as China has been importing hefty amounts of the grain and the harvest is looming in September. That raises questions over how much more foreign corn the country will buy.

The heavy rains that pounded Henan province in central China will cause damage to some hog farms in the major pork-producing region and potentially trigger fresh cases of African swine fever.

China’s imports of American goods sped up slightly in June but remain far behind the level need to meet the nation’s commitment to buy more American goods. China imported $11 billion worth of manufactured, agricultural and energy products from the U.S. in June, according to Bloomberg calculations based on data from the country’s customs agency. By the end of June, it had bought 44.4% of targeted goods set in the phase one trade pact with the U.S. 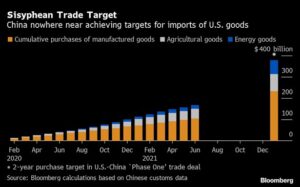 Some cereals are being cut for livestock in the Canadian Prairie province as drought concerns persist and crop-yield forecasts are lowered, Manitoba government says Tuesday.

A bipartisan group of U.S. senators introduced legislation on Tuesday that would eliminate a national mandate requiring oil refiners to blend corn-based ethanol into their fuel mix – a proposal that would slam corn growers and is likely to face vehement opposition from the farm lobby.

Republican Senator Pat Toomey from Pennsylvania and Democratic Senator Bob Menendez from New Jersey, part of the group introducing the bill, represent states with oil refineries that claim the mandates are expensive and threaten refinery jobs.

Lawmakers from both states have been pushing the Biden administration to relieve refineries of their obligations under the U.S. Renewable Fuel Standard, which was enacted to expand the market for U.S. renewable fuels and boost energy independence.

Democratic Senator Dianne Feinstein from California and Republican Senator Susan Collins from Maine joined Toomey and Menendez in introducing the bill. They say that other biofuels have lower greenhouse gas emissions, though ethanol proponents argue the product is a good option to help fight climate change now.

The senators claim the bill would help reduce carbon emissions from transportation fuels by removing volume requirements for corn ethanol, while leaving in place obligations for other biofuels and biodiesel.  Under the RFS, refiners must blend some 15 billion gallons of ethanol into their fuel each year – a huge boost to the corn industry – along with billions of gallons of other types of biofuels.

Financials Under Pressure on Fed Tone

Grains Lower Again as Dollar Up