Chinese Ag futures (SEP 21) Soybeans down 49 yuan ; Soymeal up 24; Soyoil up 86; Palm oil up 126; Corn down 9 — Malasyian Palm is down 59. Malaysian palm oil prices overnight were down 59 ringgit (-1.38%) at 4215 ahead of a key report that will probably show reserves in second-biggest grower Malaysia climbed in July. 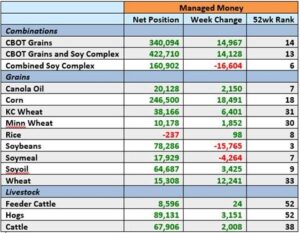 Corn and soy plantings in Brazil could be up 4%-5% in 2022 on strong demand, Corteva CEO Jim Collins says on second-quarter earnings call Friday.

Corn deals are currently halted in the Brazilian market, and prices are following opposite trends between the regions surveyed by Cepea, but devaluations have prevailed. On the average of the regions surveyed by Cepea, the prices paid to corn farmers (over-the-counter market) between July 29 and August 5 dropped by a slight 0.1%; in the wholesale market (deals between processors), values decreased by 0.8%. At B3, corn futures decreased too.

PORTS – The gap between domestic prices and the price for export is keeping liquidity low at the Brazilian ports. While in August 2020, corn prices at the port of Paranaguá (PR) were higher than that in northern Paraná, by 5 Reais/bag, this month (until August 5), corn prices have been 23 Reais/bag higher in northern PR than at that port.

CROPS – The dry weather in most Brazil has favored the harvesting, but still concern agents about crops’ conditions, majorly in southern Brazil. In Paraná, according to Seab/Deral, 10% of the state area had been harvested until August 2. Of the crops to be harvested, 53% are in bad conditions; 41%, in average conditions; and only 6%, in good conditions.

The international demand for the Brazilian soybean meal increased again in July, boosting the national exports of this by-product to the highest volume since 2004. This scenario resulted in higher export premiums, lower supply from the industry to the domestic spot market and meal valuations in Brazil.

According to data from Secex, in July, Brazil exported 1.987 million tons of soybean meal, the highest volume since June 2004, when shipments to the international market surpassed two million tons. This year (between January and July), the Brazilian exports of soybean meal have totaled 10.15 million tons, 0.5% down from that in the same period of 2020, according to Secex.

SOY OIL – On the other hand, for soy oil, prices have resumed dropping. Although the domestic demand for the production of biodiesel continues high, food processors have been cautious about purchases, waiting for prices to decrease. Besides, the international demand for this Brazilian by-product has weakened.

SOYBEAN – Soybean prices swung over the last seven days. The low inventories from the 2020/21 season, the US dollar appreciation against the Real, and increases in the export premiums pushed up prices on some days. On the other hand, some Brazilian farmers, aware of crops’ good development in the United States, increased supply in the domestic spot market, boosting liquidity, largely for exports, which pressed down values on some days.

Wheat shipments for the 2021-22 season totaled 2.8m tons as of Aug. 5, the Federal Center of Quality and Safety Assurance for Grain and Grain Products said on its website, citing inspections before exports.

India’s imports of sunflower oil could rise to a record in 2021/22 as potential bumper crops in Russia and Ukraine pull prices below rival soyoil, making it lucrative for price-sensitive buyers from the subcontinent, industry officials said. India is the world’s biggest importer of edible oils and higher purchases of sunflower oil could help exporters such as Argentina, Russia and Ukraine to dispose of surplus output. Higher sunflower oil imports could cap India’s purchases of soyoil and palm oil, however, and weigh on prices of those commodities.

India to Spend $1.5B to Boost Oil Palm Plantation to Cut Imports

U.S. federally inspected beef production falls to 523m pounds for the week ending Aug. 7 from 528m in the previous week, according to USDA estimates published on the agency’s website.

India Cumulative Monsoon Rainfall 4% Below Normal as of Aug. 8

India has so far received 502.4 millimeters of rains during the current monsoon season, which runs from June through September, compared with a normal of 525.1 millimeters, according to data published by the India Meteorological Department on Aug. 8. The eastern and northeastern region got 13% below normal rains. Rainfall in the southern peninsular region was at 9% above normal.