Key agricultural export elevators on the Mississippi River were in the direct path of Hurricane Ida, according to Bloomberg News analysis.

Mississippi River elevators owned by Archer-Daniels-Midland, Cargill, CHS, Bunge and Zen Noh are used to load and inspect bulk shipments of corn, soybeans, and wheat to send overseas, and appeared to be in the direct path of the storm.

59% of U.S. seaborne shipments by bulk carrier in 2021 have been sent via the Mississippi, with China the largest destination, taking some 14.5 million tons of agricultural goods, including 10.8 million tons of corn.

ADM and Bunge had earlier announced elevator closures ahead of the storm. At least eight bulk carriers intending to load at Mississippi elevators were caught in the storm’s path. 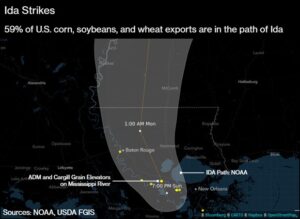 U.S. federally inspected beef production falls to 532m pounds for the week ending Aug. 28 from 544m in the previous week, according to USDA estimates published on the agency’s website.

Russian wheat exports in the 2021-22 season are now seen at 33.9m tons, down 3.2 m tons from a prior estimate, consultant SovEcon says in an emailed report.

Wheat shipments for the 2021-22 season totaled 6.2m tons as of Aug. 26, the Federal Center of Quality and Safety Assurance for Grain and Grain Products said on its website, citing inspections before exports.

Russia’s August exports of wheat, barley and maize (corn) are estimated at 4.8 million tonnes, up from 1.9 million tonnes in July, the Sovecon agriculture consultancy said.

Fueled in part by an expected increase in Chinese purchases, the U.S. is projected to export a record $177.5 billion worth of agricultural goods in fiscal year 2022, according to the Agriculture Department’s latest trade outlook.

Agricultural exports to China are expected to hit $39 billion in FY2022, according to the report, which cites higher prices for soybeans and sorghum as leading factors behind a projected $2 billion increase over FY2021. The fiscal year begins on Oct. 1.

The report does not mention the phase-one trade agreement between the United States and China, which is set to expire in December. The deal stipulates that China must increase its purchases of American agricultural goods by $19.5 billion in 2021 from a baseline of $19.6 billion in 2017 — the last year before trade tensions flared between the U.S. and China after the Trump administration began to hit Chinese imports with Section 301 tariffs.

China will remain the top destination for U.S. agricultural exports in FY2022, the report says.

USDA also has revised its forecast for FY2021, predicting a total of $173.5 billion in ag exports — an increase of $9.5 billion over its projection in May. The increase is due to higher livestock, poultry and dairy exports and an expanded definition of “agricultural products,” the report says. USDA has adopted the World Trade Organization definition of the term, which “adds ethanol, distilled spirits, and manufactured tobacco products, among others, while removing rubber and allied products from the previous USDA definition,” the outlook says.

Soybean prices have dropped in the Brazilian market this week, due to the dollar depreciation against the Real (by 3.1% between August 19 and 26, to 5.25 BRL on Thursday, 26), once the premiums did not offset the decrease of the American currency. As regards crops, the beginning of sowing activities is near, and, despite the current high profitability of soybean, the weather and the high production costs are still concerning farmers in Brazil.

On the other hand, in the United States, soybean prices increased in the last days, influenced by data showing that crops conditions have worsened, which may reduce productivity amid low world inventories.

The Brazilian exports of soybean have been high, totaling five million tons this month (considering the three first weeks), according to data from Secex (Foreign Trade Secretariat). The daily average of shipments is nearly 20% higher than that in August/20, and the price received in dollar, 36.4% up from that a year ago. On the average of 2021, Brazil has exported 71 million tons of soybean (Secex).

EXPECTATIONS FOR 2021/22: The area allocated to soybean crops in Brazil has been growing for 15 years. For the 2021/22 season, Conab (Brazil’s National Company for Food Supply) estimates the soybean area to total 39.91 million hectares, 3.6% larger than that in the previous season. The Brazilian soybean output may total 141.26 million tons, 3.9% up from that in the previous season (135.98 million tons), keeping Brazil as the major soybean-producing country in the world in 2022.

Soybean exports in the 2020/21 and the 2021/22 seasons are expected to set records, estimated at 83.42 and at 87.58 million tons, respectively. The demand from China is supposed to increase, according to Conab.

Besides, soybean production costs are currently high in Brazil, influenced by the strong dollar. This scenario keeps farmers cautious when selling the product from the 2021/22 season – so far, 30% has been sold, against 60% in the same period last season, according to the agents consulted by Cepea.

Cepea, August 27 – Corn prices are fading in most Brazilian regions surveyed by Cepea, reflecting the disinterest of purchasers, who expect prices to decrease more. As regards sellers, as the harvesting is advancing and supply is increasing in the national spot market, some of these agents have been willing to lower asking prices, aiming to take advantage of the current price levels and to make cash flow to pay debts.

CROPS – Farmers are waiting for the return of rains in most Brazilian regions in order to begin preparing the summer crop. As for the harvesting of the second crop, in Mato Grosso, activities had reached 99.69% of the area until late last week, according to Imea.

In Mato Grosso do Sul, according to Famasul, the harvesting had reached 58% of the state area until August 20. In Rio Grande do Sul, corn sowing is beginning to advance faster, majorly in irrigated areas. Many farmers anticipated sowing to take advantage of the rains forecast for the coming days.

Mississippi River Is Flowing in Reverse as Ida Pushes Inland

The Mississippi River is flowing in reverse in southeastern Louisiana as Hurricane Ida forces vast volumes of sea water ashore, according to flood-control authorities.

At least one ferry broke loose from its moorings along the river, said Kelli Chandler, regional director of the Southeast Louisiana Flood Protection Authority-East. Storm surges from hurricanes and tropical systems in the Gulf of Mexico have been known to push the north-to-south flowing Mississippi in reverse.