Overnight trade has SRW Wheat up roughly 5 cents; HRW up 8; HRS Wheat up 9, Corn is up 1 cent; Soybeans down 1 to 3 cents; Soymeal unchanged, and Soyoil down 45 points.

Malaysian palm oil prices were down 67 ringgit at 3,778 (basis June) at midsession retreating after 3 days of gains.

South America Weather Forecast: In Brazil, net drying is still expected in center south and at least some of the interior southern production areas the next seven to ten days. The GFS model has been consistent, including last evening’s run, with some notable shower and thunderstorm activity occurring in Parana and Santa Catarina Monday through next Wednesday. Yesterday’s midday European Model showed much of this not occurring with the exception of near the coast.  Argentina’s conditions will continue to be good for late maturing summer crops. 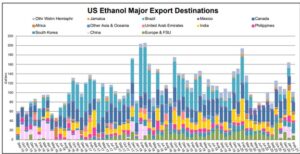 Wire story reports market participants have patiently awaited a boost in U.S. corn exports to match the record yearly expectation, but the wait is officially over as recent shipments have blown past nearly every benchmark. U.S. corn exports in February hit 6.3 million tonnes (248 million bushels) according to official census data published on Wednesday. That tops 2008’s record for the month by 17% and is the largest monthly volume since July 2018. January corn exports had missed the month’s all-time high by a handful of cargoes, and the December volume was the biggest in 13 years. That marked a much-needed reversal from the average export pace observed in the first quarter of 2020-21 that began on Sept. 1. Weekly export data suggests that March shipments reached an all-time monthly record by a long shot, likely topping 9 million tonnes. The largest-ever volume is 7.75 million tonnes set in May 2018, and the March high is 6.7 million from 2017.

The U.S. Department of Agriculture (USDA) will alter how it reports soybean oil use by biofuels producers beginning with its monthly World Agriculture Supply & Demand Estimates (WASDE) report in May. The change comes amid rising demand for vegetable oils from producers of renewable diesel, a clean burning fuel made from soy and other fats and oils. The USDA currently reports use from the sector in a catch-all category that also includes demand from food makers and animal feed producers. Use by makers of soy biodiesel, which is different from renewable diesel, currently occupies its own demand category.

The president and auto industry maintain the nation is on the cusp of a gigantic shift to electric vehicles and away from liquid-fueled cars, but biofuels producers and some of their supporters in Congress aren’t buying it. They argue that now is the time to increase sales of ethanol and biodiesel, not abandon them. To help address climate change, President Joe Biden has proposed an infrastructure plan that includes billions of dollars to pay for 500,000 electric vehicle charging stations, electrify public vehicles and enhance the nation’s power grid. These moves follow initiatives in California and other states to mandate electric vehicle sales and a goal by General Motors to shift production fully to electric vehicles by 2035.

Requiring financial institutions and companies to disclose climate change risks will trigger huge shifts in capital investments around the world, U.S. climate envoy John Kerry said, adding that U.S. President Joe Biden plans to issue an executive order on the issue soon. Kerry gave no details about the executive order, and the White House had no further comment. Kerry noted that the European Union had already adopted such requirements.

World food prices rose for a 10th consecutive month in March, hitting their highest level since June 2014, led by jumps in vegetable oils, meat and dairy indices, the United Nations food agency said on Thursday. The Food and Agriculture Organization’s food price index, which measures monthly changes for a basket of cereals, oilseeds, dairy products, meat and sugar, averaged 118.5 points last month versus a slightly revised 116.1 in February. The February figure was previously given as 116.0.

The Rome-based FAO also said in a statement that worldwide cereal harvests remained on course to hit an annual record in 2020, adding that early indications pointed to a further increase in production this year. FAO’s cereal price index fell 1.7% month on month in March, ending eight months of consecutive gains, but still 26.5% higher than the same period last month.

The Russian government has approved a formula-based export tax system for sunflower oil and a higher export tax for sunflower seeds, it said on Wednesday, as part of a drive to combat domestic food price inflation. Starting from September, the formula-based export tax on sunflower oil is planned for one year. The government set it at 70% of the difference between $1,000 and an indicative price per tonne that will be calculated by the agriculture ministry. The ministry will reduce that indicative price by $50 per tonne each month.

Euronext wheat ended higher on Wednesday, with nearby futures recovering from a fresh low for this year, supported by strength in maize as traders assessed end of season demand prospects. Front-month May milling wheat settled up 1.50 euros, or 0.7%, at 207.25 euros ($246.23) a tonne.

Philippine President reduced pork import tariffs as the government seeks to address a domestic shortage by ramping up purchases from abroad. The Southeast Asian country, the world’s seventh-biggest pork importer before local demand fell due to the pandemic, plans to import roughly 400,000 tonnes of pork this year, more than double the 162,000 tonnes planned earlier. The pork shortfall, due to African Swine Fever outbreaks, has pushed local meat prices higher, causing inflation to shoot up and stay above the central bank’s full-year target band of 2% to 4% in the first quarter.