Malaysian palm oil prices were down 49 ringgit at 3,902 (basis July) at midsession.

U.S. Weather Forecast: Last evening’s GFS model run was mostly similar to the midday GFS model for the Northern Plains and showed occasional shower activity in the region over the next two weeks that would still leave a need for more moisture.

South America Weather Forecast: Notable moisture relief to interior southern Safrinha corn areas of Brazil is still unlikely in at least the next two weeks. Last evening’s GFS model run did suggest that meaningful rain gets up into part of this area May 12 – 14. Conditions in Argentina are still expected to be favorably mixed the next two weeks.

For the week ended April 22nd–

The rapid increase in feed demand from China that began last year has been a big part of why Chicago corn futures are at multiyear highs, though a little more follow-through for U.S. exports would go a long way in confirming the storyline. China had not been a major corn importer for several years, but domestic corn prices began rising in early 2020, prompting unusually large U.S. bookings. Through April 22, the Asian country had purchased 23.2 million tonnes of U.S. corn for delivery in the 2020-21 year that ends on Aug. 31. 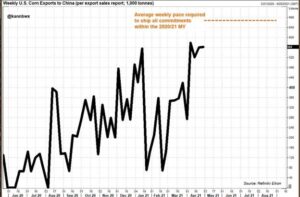 Wire story reports corn has led the rally among agricultural crops, rising more than 30% in 2021 to touch its highest prices in nearly eight years. That has outpaced the rally for wheat and soybeans, which also reached their highest prices since 2013. The run-up for corn and soybeans may not be over. Among the three commodities, “corn is the driver…and China is the driver for corn.”

The International Grains Council raised its forecasts for grains harvest this year thanks to slightly larger than expected corn and soybeans crops. The intergovernmental body said grains production in the 2020-21 season would total 2.226 billion metric tons, 2 million tons more than it forecast last month.

The upgrade came as the IGC said corn and soybean harvests would each be 1 million tons larger than previous forecasts at 1.140 billion tons and 362 million tons, respectively.

For the 2021-22 season, the IGC kept its forecasts for grains harvest steady at a record 2.287 billion tons despite adjusting its forecasts for consumption of wheat and corn. The IGC said that corn consumption would be four million tons less than previous forecasts while wheat consumption would be four million tons higher, in part thanks to greater use as an animal feed. Surging corn prices in recent months have driven expectations that livestock farmers might switch to cheaper sources of animal feed such as wheat. The IGC said grains markets would be tight this year, forecasts stocks would drop by 8 million metric tons. For the 2021-22 season, the IGC expects stocks levels to be unchanged thanks to record crop production levels.

Argentine farmers sped up soy harvesting over the last week thanks to drier weather, the Buenos Aires Grains Exchange said on Thursday, although the pace of the harvest lagged that of the previous season due to severe rains last month. Intense showers in early March made it difficult for harvesters to access the fields in the main agricultural areas of Argentina. The country is expected by the exchange to bring in a total 43 million tonnes of soy in the 2020/21 season. Harvesting advanced 14.4 percentage points in the last seven days, to reach 32.9% of planted soy area, the exchange said in its weekly crop report. At this point last year, growers had brought in 68.2% of the 2019/20 harvest, the exchange said.

The exchange said this season’s corn harvest, which overlaps that of soy on the Pampas grains belt, has advanced only 19.5% so far as growers give priority to soybeans, the country’s main cash crop.

Romania’s wheat crop is expected to recover this year after a drought-driven sharp fall in 2020, likely boosting the Black Sea state’s supply on offer for Egypt’s international grain tenders, farmers and traders said on Thursday. Romania, has been among the largest grain sellers in the European Union, and along with France and Russia is an active exporter of cereals to Middle East, with Egypt the main buyer. It harvested a meagre 6.4 million tonnes last year, a 38% drop on the year, from 2.1 million hectares, and farmers and traders see a slightly higher acreage, mild winter and optimal soil humidity helping it reap about 8.5 to 10 million tonnes.

South African farmers are expected to harvest 5% more maize in the 2020/2021 season compared with the previous season as favourable weather conditions boosted yields, the government’s Crop Estimates Committee (CEC) said on Thursday. The CEC, giving its third production estimate for the season, forecast the 2021 harvest at 16.095 million tonnes, up from the 15.300 million tonnes harvested last season.

Malaysia’s palm-oil exports during the April 1-30 period are estimated to have risen 9.7% on month to 1,400,724 metric tons, cargo surveyor AmSpec Agri Malaysia said.