Malaysian palm oil prices were down 89 ringgit at 3,901 (basis July) at midsession on ideas of lower India import demand to further rises in COVID.

U.S. Weather Forecast: U.S. remains one of concern for the southwestern U.S. Plains with West Texas and the southwestern hard red winter wheat production areas getting very little rain over the next couple of weeks. A good mix of rain and sunshine is expected in the Midwest with near to above average temperatures.  Portions of the Delta need to dry out after too much rain too frequently recently. A boost in precipitation and warm temperatures are needed in the northern Plains and Canada’s Prairies.

South America Weather Forecast: Interior southern Brazil, including most Safrinha corn areas, sugarcane country and coffee areas will not likely receive large volumes of rain mid- to late week next week and into the following weekend. Argentina will be dry for the next seven days with temperatures near to above average; next week will trend cooler and a boost in precipitation is expected in the south and eastern parts of the nation

Chicago-traded grains and oilseeds have gone on an impressive rally this month, though speculators took a much greater interest in soybeans than corn last week despite corn futures gaining ground on beans. Both nearby May and December CBOT corn futures have surged nearly 16% so far this month while May and November soybeans have each jumped 7%. Investors have maintained very bullish corn bets since late last year, but their soybean enthusiasm has waned over the last several months. 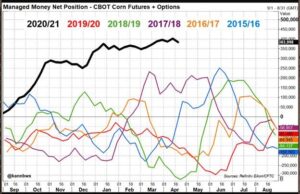 Strategic Biofuels LLC, a project development company, announced on Friday it plans to develop a renewable diesel plant in Louisiana that will produce up to 32 million gallons per year of renewable fuel using wood waste. The company, through its subsidiary Louisiana Green Fuels, will invest at least $700 million for the project, the announcement said. The development is one of many over the last year, as companies, including oil refiners, scramble to capture incentives for the production of renewable diesel.

China’s wheat auction from its state reserves fell further from the previous week, according to an official statement published, amid flat demand and a government move to curb trade. China sold 311,837 tonnes of wheat, or only 7.75% of the total offered, at an auction of state reserves last week, the National Grain Trade Center said. The end users have built up ample stocks, plus the government’s restriction on traders’ participation in the auction. Demand is not that strong either, so sale was low.

Brazilian soybean farmers had finished harvesting on 91.3% of the estimated planted area for the oilseeds as of April 16, up from 87.2% on the same date a week earlier and higher than the 89.4% five-year average for the date , according to agricultural consultant Datagro. The group raised its estimate for total soybean production in the 2020-2021 growing season to 136.1 million metric tons, which would be a record for Brazil. That estimate is in line with the USDA’s calculation of 136 million tons for the 2020-2021 season, and would make Brazil the world’s biggest soybean producer for the second year in a row, ahead of the US.

Large Brazilian meatpackers are turning to wheat as they try to fend off a rise in the cost of corn, the main livestock feed ingredient, meat lobby ABPA said. Demand from meat processors, who provide feed to the farmers who raise the livestock, is driving a rise in wheat planting intentions in Rio Grande do Sul state. Wheat can replace 100% of corn as feed for pork and poultry.

Argentina is considering an increase in grains export taxes sparking concern among farm leaders who have long worried that the Peronist government might further intervene in the markets in a bid to control inflation. It already slaps a 33% tax on international soybean exports; 31% on soymeal and soyoil; and 12% on corn and wheat.

The Ministry of Agriculture expects Russia to retain its leadership in wheat exports in the 2020-2021 agricultural year (July 1, 2020 – June 30, 2021). According to the forecast, Russia will retain its leading positions in wheat exports by the end of the season. The Ministry of Agriculture also reported that 43.6 mln tonnes of grain crops were exported in the current agricultural year, which is 17.5% higher than in the same period last season (37.1 mln tonnes).

Russia’s April exports of wheat, barley and maize (corn) are estimated at 2.3 million tonnes, down from 2.4 million tonnes in March, the SovEcon agriculture consultancy said.

Russian wheat export prices rose for a third week in a row last week, buoyed by higher prices in Chicago and Paris on supply concerns, analysts said on Monday. Russian wheat with 12.5% protein loading from Black Sea ports for supply in May was at $265 a tonne free on board (FOB) at the end of last week, up $17 from the previous week, IKAR agriculture consultancy said. Sovecon, another consultancy, said that both wheat and barley prices rose by $6 to $253 and $239 respectively.

Ukraine’s agriculture minister said he opposed proposals to introduce a ban on sunflower seed exports from Ukraine, a move initiated by the economy ministry. The economy ministry said this week it had proposed banning exports of sunflower seeds from May 15 to Sept. 30, even though volumes of seed exports have been tiny. Ukraine was a leading seed exporter more than 20 years ago but exports largely stopped after the country imposed a 23% duty in 1999. Ukraine sunflower oil production rocketed since then, making the country one of the world’s leading sunoil exporters.

Export prices for Ukrainian sunflower oil have risen by up to $15 a tonne over the past week following the global upward trend, analyst APK-Inform said. It said last week’s agreement between the government and sunflower oil producers to limit 2020/21 sunoil exports to 5.382 million tonnes did not affect prices. APK-Inform said sunoil export bid prices had risen to $1,550-$1,565 a tonne FOB Black Sea with delivery in May-June.

Euronext wheat and rapeseed edged lower on Friday, consolidating below contract highs after a surge in grain markets this week linked to supply concerns and investment fund flows. September milling wheat settled down 1.50 euros, or 0.7%, at 219.25 euros ($264.63) a tonne. Over the week, it was up 6%, having rallied to a life-of-contract peak of 222.00 euros on Thursday. Old-crop May wheat was down 0.9% at 236.25 euros. It climbed to a new contract high of 240 euros on Thursday, supported by short-covering in the run-up to the next month’s expiry.

South African maize farmers are expected to harvest 7% more of the staple crop during the 2020/2021 season compared with the previous season, as yields are boosted by good weather conditions and increased plantings, a Reuters survey showed. South Africa’s Crop Estimates Committee (CEC) is expected to forecast the maize crop at 16.349 million tonnes for the 2020/2021 season, up from the 15.300 million tonnes harvested last season.