Malaysian palm oil prices were up 104 ringgit at 3,694 (basis July) at midsession on improving exports.

U.S. Weather Forecast: Significant rain and snow tonight into Friday in much of the Hard Red Winter Wheat Region will still notably increase soil moisture with the exception of the Texas Panhandle and western part of the Oklahoma Panhandle.

The GFS model continues to shift around a possible storm system in the Northern Plains in the last week of April. Last evening’s run was drier and less aggressive with this system April 26 – 28 compared to the midday GFS model.

South America Weather Forecast: In Brazil, erratic shower and thunderstorm activity is expected through April 24 leading to some areas receiving meaningful rainfall with an increase in soil moisture and some pockets missing out from getting much. Last evening’s GFS model kept “some” rain in Brazil through the end of April; though, it showed less rain in northern areas and greater rainfall near Paraguay April 28 – 30 compared to the midday GFS model run.  In Argentina, conditions will still be mostly good; though, rain Monday into Thursday of next week will cause some temporary fieldwork disruption.

For the week ended April 8th–

U.S All Wheat sales are unchanged versus a year ago, shipments unchanged with the USDA forecasting 2% increase

Soymeal unchanged, shipments up 8% (USDA up 1%)

The U.S. Environmental Protection Agency has asked industry groups for their input on the future of the nation’s biofuel policy after it ends its current phase in 2022. The consultations will provide a new opportunity for the oil, corn and biofuel lobbies to reshape the regulation, called the Renewable Fuel Standard, which has bitterly divided the two industries for more than a decade.

Under the RFS, oil refiners must blend increasing billions of gallons of biofuels into the nation’s fuel mix each year or buy trade able credits from those that do. The oil industry dislikes the policy because it is costly and props up a huge and competing market for biofuels like corn-based ethanol, while the corn and biofuel sectors want to see the program expanded to help farmers hard hit by years of low commodity prices and trade disputes.

China’s wheat feeding to pigs and poultry has dented demand for alternate feeds and clouded the market outlook for soybean meal and other key ingredients used by the country’s massive feed sector. Chinese feed producers have sharply raised wheat purchases in the past several months to replace corn, which has rallied by more than a third in the past year to a rare premium over wheat following a drop in corn output and state stockpiles last season. Greater feed use of wheat, which has more protein than corn, has also cut demand for soymeal, the main protein source in livestock rations, putting further pressure on local crushing margins and raising questions about China’s appetite for soybeans just as U.S. farmers gear up to commit more than 87 million acres to the crop. 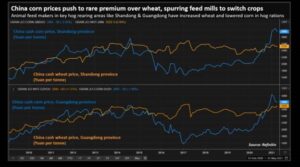 China’s first-quarter pork production rose 31.9% from a year earlier to 13.69 million tonnes, data showed on Friday, the highest quarterly volume in two years. The surge comes after huge investments in rebuilding China’s hog herd since the deadly African swine fever disease ravaged farms in 2018 and 2019. China’s pig herd increased to 415.95 million head at the end of March, a 29.5% rise on the year, and up from 406.5 million at the end of December, the National Bureau of Statistics said.

Brazil’s Litoral Soluções, an unlisted port agent representing U.S. grain trader Bunge, won the reversal of an injunction blocking its right to ship grains from a key southern Brazilian port’s public terminal. The ruling was handed down on Wednesday by Judge João Carlos Franco, who overturned his own decision from last week suspending the contract. A final court decision is still pending on whether Litoral’s contract, which was supposed to take effect on April 12, will enter force.

Argentine farmers are expected to harvest 46 million tonnes of corn in the 2020/21 season, the Buenos Aires Grains Exchange said, citing better than expected yields as the reason for increasing its previous 45 million tonne estimate. Dry weather on the Pampas farm belt, which started in mid-2020 and lasted through February, had caused worry about crop performance. But March and April rains have eased those concerns.

Ukraine’s UMG Investments plans to build a grain export terminal at the Black Sea port of Pivdenyi near Odessa with the annual capacity of 9 million tonnes, it said. The terminal could cost about $150 million and is expected to be completed in 2-3 years.

Euronext milling wheat prices hit new contract highs on Thursday in volatile trade, supported by ongoing concerns of adverse weather in the U.S. Plains and France. Most traded September unofficially closed 1.1% higher at 207.00 euros a tonne after hitting a contract high of 207.75 euros in earlier trade.

India is likely to receive an average amount of rainfall during the monsoon in 2021, the state-run weather office said, raising expectations of higher farm and economic growth in Asia’s third-biggest economy, which is reeling from a surge in coronavirus cases. The monsoon rains are expected to total 98% of the long-term average.