Malaysian palm oil prices were up 61 ringgit at 3,791 (basis June) at midsession supported by improving exports.

U.S. Weather Forecast: An important precipitation event is still expected across much of the Hard Red Winter Wheat Region Thursday into Friday which will increase topsoil moisture more with a possible exception in the Texas Panhandle.

Last evening’s GFS model run was notably wet in South Dakota, southern Montana, and the southern half of North Dakota April 27 – 29. The model suggested as much as 1.00 to 4.00 inches of moisture in this area.

South America Weather Forecast: In Brazil, erratic shower and thunderstorm activity through the next ten days will still provide some relief from recent dryness.  Conditions in Argentina will be mostly good; though, rain Monday through next Wednesday will cause some temporary disruption of fieldwork.

The U.S. soybean processing pace jumped in March following a smaller-than-expected crush the prior month, propelled in part by strong demand for vegetable oils to make biofuel.

The monthly NOPA report is scheduled for release at 11 a.m. CDT on Thursday.

Wire story reports projected U.S. corn supplies are still waning toward multi-year lows despite dragging ethanol output, though recent production and demand figures along with an upbeat outlook for the summer driving season should instill some optimism over the corn-based biofuel.

In the four weeks ended April 9, U.S. ethanol output averaged 951,000 barrels per day, off the recent highs observed in November and December and 6.6% below the 2017-2019 average for the same period. That departure from normal is a post-pandemic best. The latest production average reflects a slight downturn from the late March levels, somewhat consistent with seasonal trends for the time of year. 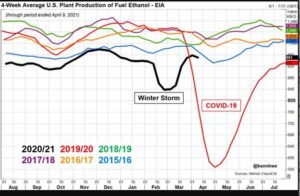 The U.S. Department of Agriculture’s statistics division is conducting a “deep dive” review of how it conducts its quarterly U.S. grain stocks reports, an official said. The quarterly reports are among the most market-sensitive releases from the USDA’s National Agricultural Statistics Service. The stocks figures, detailing the amount of major crops held on and off U.S. farms, are based on surveys of about 8,400 commercial grain facilities and roughly 80,000 farmers.

Cuba announced that it was loosening a decades-old ban on the slaughter of cattle and sale of beef and dairy as part of agricultural reforms as the Communist-run country battles with food shortages.

Ranchers will be allowed to do as they wish with their livestock after meeting state quotas and always with a guarantee it will not result in a reduction of the herd.

A bid by agricultural commodities trader Bunge to extend its dominant role at a strategic Brazilian port’s public terminal for two years has been blocked by a temporary court decision. The decision is the latest twist in a long-running dispute between Bunge’s port agent Litoral Soluções and rivals who complain it has been granted a virtual monopoly at the public terminal, which sits adjacent to two private terminals, one owned by Bunge itself and another by a local unit of Japan’s Marubeni called Terlogs.

The Ukraine traders union UGA said it was concerned by the government’s plan to curb sunflower oil exports, which could cause a big fall in the amount of landed used for sunflower sowing and reduce the harvest. UGA is concerned about rumors of a desire of certain populists in the government to push through restrictions on exports of sunflower oil from Ukraine by the introduction of quotas and the establishment of zero quota.

Ukraine’s 2021 sunflower seed harvest is likely to rise to a record 16.4 million tonnes due to an expected 6% increase in the sowing area, analyst APK-Inform said on Wednesday.

The consultancy said farmers could sow 6.8-6.9 million hectares of sunflower this year.

Sunoil output could exceed 7 million tonnes in the 2021/22 September-August season, 16% more than Ukraine was able to produce in 2020/21, the consultancy said, adding Ukraine may export 6.5 million tonnes of sunoil next season.

It is too early to estimate the impact on grain crops from a severe frost that has hit France but there is some concern over damage in the central and southern parts of the country, farm office FranceAgriMer said. Temperatures have fallen well below zero for several nights in a row in many parts of France, the EU’s top grain producer, causing major damages to vineyards, orchards and sugar beet and prompting the government to promise financial aid.

German pig prices remained stable this week with sales inside Europe continuing to underpin following import bans on German pork last year by China and other Asian buyers, traders and industry sources said. Pig prices were unchanged on the week at 1.50 euros a kg slaughter weight, the same level as in March and up from 1.21 euros in February. Piglet prices were also unchanged at 53 euros per animal against only 32.50 euros in early February, the association said.

Indonesia’s exports surged in March due to higher commodity prices and rebounding global demand, while imports also grew by more than expected last month as domestic manufacturing activity improved, statistics bureau data showed. Merchandise exports beat forecast with an annual jump of 30.47% to $18.35 billion on rising shipments of oil, natural gas, palm oil, steel and coal. Export growth in March was the highest since July 2017, according to Refinitiv Eikon data, and compared with a Reuters poll forecast of 11.74%.

Indonesia’s biodiesel makers can export one million kilo litres (KL) biodiesel this year, Paulus Tjakrawan, vice president of Indonesia Biodiesel Producers Association said at the German industrial trade fair, Hannover Messe. It would be a jump from 2020’s 27,774 KL exports, the group’s data showed, due to the pandemic and to higher biodiesel blend requirement at home for the palm oil-based fuel.