Malaysian palm oil prices were down 41 ringgit at 3,726 (basis June) at midsession on higher production expectations.

There is talk that China may tighten controls on commodity prices. China Central bank asked lenders to tighten credit growth. US Fed Chairman suggested US economy near an inflection point. Looking for US economy to grow and unemployment to drop but warned virus could slow World economy. There are also headlines about inflation weighing on US equities. There is also increase tension between China and US over Taiwan safety.

U.S. Weather Forecast: For the Midwest, rains with the weekend system will be finishing up by Monday morning and then things look to be fairly quiet for much of the rest of the week. The 6-10 day period has a system to arrive in the far west by Friday and work through the entire region over the weekend. Things then look to quiet down for the first half of next week. Temps will run below average for the next 10 days, including sub freezing readings into northern MO and central IL, IN and OH.

The Southern Plains in the 6-10 day period sees the rains moving in Thursday night to spread through much of the region Friday. Temps will run below average in all areas for the next ten days, including sub freezing temps in all but the SE 1/3rd of KS and eastern 2/3rd of OK and TX.

South America Weather Forecast: In Brazil, the 6-10 day sees rains of .50-1”+ to fall across most areas, with the possible exception of Minas Gerais, where things are indicated by the European to be mainly dry. In Argentina, the 6-10 day has some mixed ideas from the models, with the GFS indicating things to be mainly dry across most areas, while the European sees totals of .25-.85” to be widespread.

Speculators’ hugely bullish corn gamble that was set in motion late last year has paid off so far with recent outlooks suggesting global corn supplies could remain tight into 2022. Chicago corn futures last week hit contract highs in nearby and deferred months, further backing that thesis. But it seems that commodity funds may have found a ceiling on their corn bets, at least for now, because they sold the yellow grain even after the U.S. government revealed farmers’ plans for fewer 2021 acres than expected. 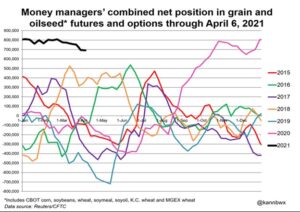 China sold 515,209 tonnes of wheat, or only 12.81% of the total on offer, at an auction of state reserves last week, the National Grain Trade Center said. The volume sold, at an average price of 2,349 yuan ($358.19) per tonne, declined from more than 1.5 million tonnes sold in the prior week, following government intervention. Chinese traders and feed makers have been scooping up wheat from reserves to substitute for more expensive corn in feed use, amid soaring prices of the latter grain.

IKAR has raised its forecast for Russia’s 2021 wheat crop to 81 million tonnes from 79.8 million tonnes, the Russian agriculture consultancy said.

Russia’s April exports of wheat, barley and maize (corn) are estimated at 2.2 million tonnes, down from 2.4 million tonnes in March, the SovEcon agriculture consultancy said.

All Ukrainian regions have started the 2021 spring grain sowing, seeding a total of 853,260 hectares of wheat, barley, peas and oats as of April 8 or 11% of the expected area, economy ministry data showed. The 2021 sowing campaign started a few weeks late due to lingering cold weather in most of the country. The overall grain area is likely to total 15.5 million hectares in 2021, including 7.6 million hectares of spring grains.

Ukrainian wheat export prices have decreased by a further $7 a tonne over the past week amid a downward trend in Russian export prices and a positive outlook for the 2021 wheat harvest, APK-Inform agriculture consultancy said. The Ukrainian government has said good weather is likely to help farmers increase their grain crop to at least 75 million tonnes this year from about 65 million tonnes in 2020. Bid prices for high-quality soft milling wheat decreased by $7 to $232-$237 a tonne FOB Black Sea port, APK-Inform said. Feed wheat also fell by $7 a tonne to $228-$233 FOB Black Sea.

Euronext wheat futures ended higher on Friday, buoyed by continued strength in corn prices, but trimmed earlier gains following a widely watched U.S. government crop report. May milling wheat settled up 1.00 euro, or 0.5%, at 212.75 euros ($253.09) a tonne. It earlier rose to a one-week high of 215.25 euros, buoyed by a near eight-year high for U.S. corn.

Malaysia’s end-March palm oil stocks jumped more-than-expected to a four-month top, boosted by higher imports and production, but a surge in exports kept domestic supply in check, data from the industry regulator showed on Monday.